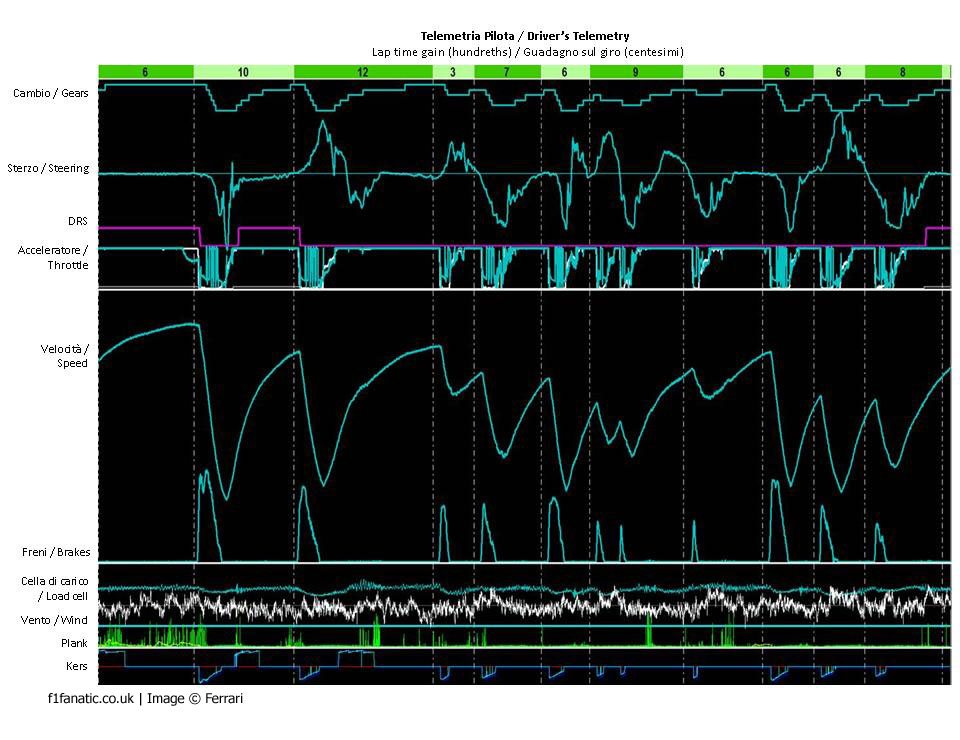 The Hungarian Grand Prix may be behind us but Ferrari have provided some extra insight into the demands of the tricky, 4.3 kilometre Hungaroring*.

These two images reveal the key data behind a lap of the circuit in a pre-2014 specification F1 car. The first shows a single car on the track, and the second includes an overlay of the same data for a second car, which is used by drivers to see where they might be losing or gaining time relative to their team mate.

Most of the information in the chart is self-explanatory: which gear the driver is in, how much steering angle they are using, DRS use, KERS use and recharging (which as of this year are no longer under the direct control of the driver), how much they are accelerating and braking, and what the car’s speed is.

The trace also shows relevant information from other sensors including wind speed and plank height – i.e., how close the car is to the ground – and the load cell, which is used to understand the positioning of the car to draw further comparisons between the two drivers.

Ferrari have not identified which of their drivers corresponds to which line on the second chart, or given any information about the condition of the cars during the laps. However data engineer, Giuliano Salve provides some insight into how drivers’ lap times are compared using telemetry:

Go ad-free for just £1 per month

“The blue and the red driver display minimal differences over a lap, producing almost identical graphics, but if one looks deeper into the management of the throttle and brake and look at the speed graph, one can spot interesting differences.

“Looking at the first part of the speed and brake line, one can see that the red driver is harder on the brakes, but quicker to get back on the throttle, as soon as he’s passed the apex of the corner. On the other hand, the blue driver has a more gentle style, braking slightly earlier but with less force, which results in him scrubbing off less speed under braking.

“In fact, in the throttle and brake graphic there is an extra line, a comparison of the lap time of both drivers. The engineers continuously compare the efforts of both drivers to try and get the best possible result.

“It’s all down to thousandths of a second, but that’s how one improves, closing gaps that might even be measured in seconds and help a driver get to the top.”

This same lap time comparison was what Lewis Hamilton was so eager to share with the world at Spa-Francorchamps in 2012.

Team mate Jenson Button had used a low-downforce rear wing on his McLaren and taken pole position. Hamilton had opted for a high-downforce wing, and as a result had lost a lot of time on the straights, which was highlighted in the telemetry sheet he posted on Twitter, then quickly deleted when his team pointed out their rivals could glean valuable information from it. *Ferrari did not state which circuit is represented in the data however inspection reveals it to be the Hungaroring.

26 comments on “Ferrari reveal telemetry lap of the Hungaroring”