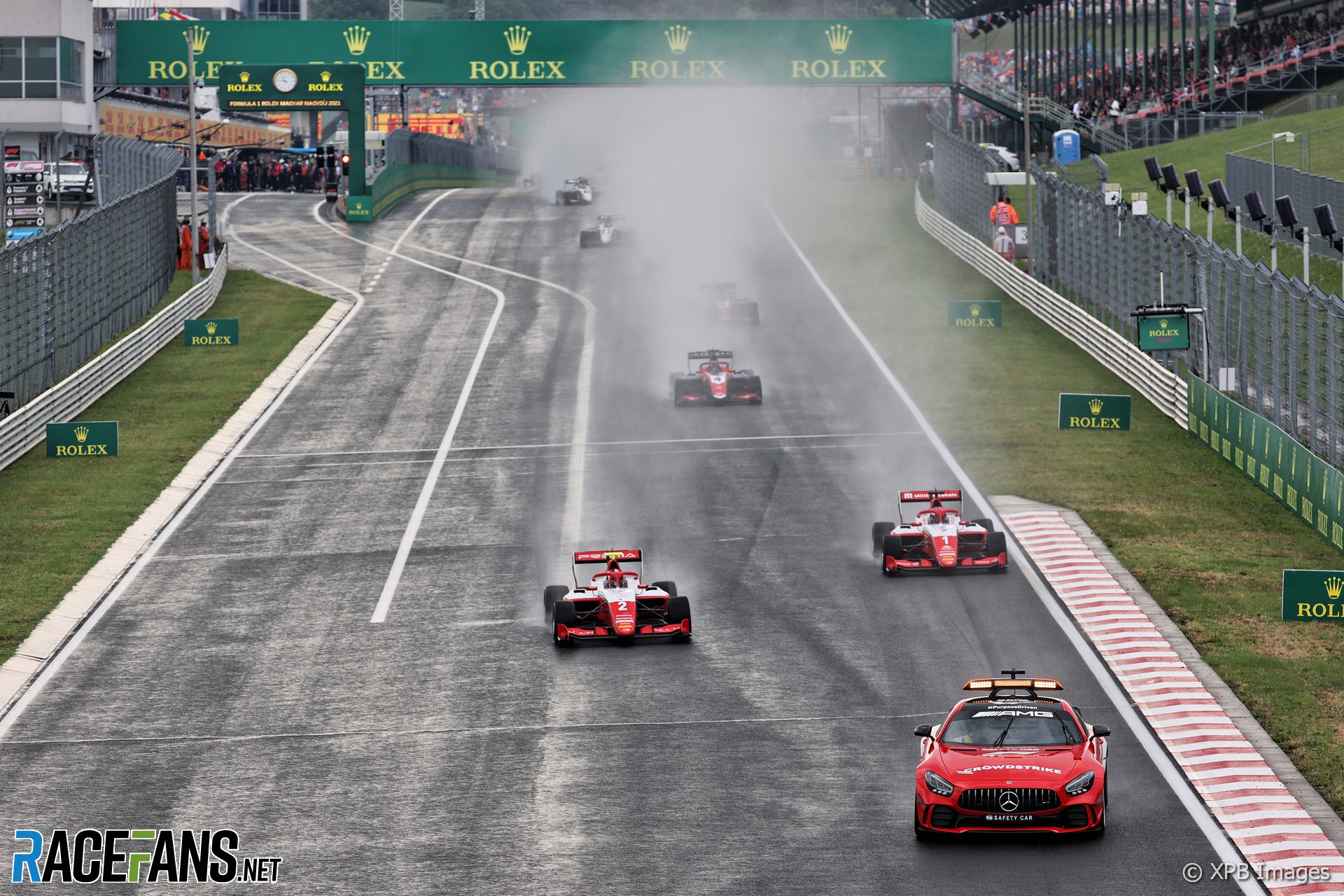 Dennis Hauger beat team mate Arthur Leclerc to victory in F3’s third race in Budapest, a rain-hit encounter which started and ended behind the Safety Car.

Leclerc had beaten championship leader Hauger to pole on Friday, although didn’t get to start the race from the grid spot he had earned.

Heavy overnight rain had made the track greasy, then the skies opened again shortly before the race start. The cars therefore set off behind the Safety Car.

Teams were in doubt over whether further rain was expected. Campos warned Lorenzo Colombo another shower would arrive within five minutes. Regardless, after two laps race control called the Safety Car in and Leclerc led the rolling start.

He held the lead, Hauger stuck in his spray as the three Trident cars behind them entered into a high-stakes battle for third place on a track with no dry line.

However the racing swiftly came to a stop after Victor Martins clashed wheels with Oliver Rasmussen and ended up in the wall at turn nine. The Safety Car was summoned before Martins managed to get going again and returned to the pits for a replacement front wing as more rain began to fall.

The interruption was therefore very brief, and racing restarted on lap four. Leclerc again held the lead, Hauger trying to avoid his spray by taking different lines but unable to find good grip on the wetter areas of the track.

Caldwell tried to make a move on Frederik Vesti but fell back into Iwasa’s clutches. The Prema driver then missing his braking point into turn one and ran wide, relegating Caldwell to ninth, losing a place to Iwasa.

Hauger was piling pressure on Leclerc, who made a mistake on lap seven, narrowing the gap between the pair. Leclerc held on while the Prema cars battled through corner after corner of lap eight, Jack Doohan’s Trident closing in behind both of them.

Hauger managed to finally pass Leclerc with an audacious move round the outside of turn two, Leclerc unable to fight back and continue the battle. Hauger didn’t push to extend a significant lead but seemed able to do enough to keep Leclerc out of his wing mirrors.

The sun came out early in the race and as it continued to beat down the track dried quickly. Hauger was reminded to “cool down the tyres, smooth traction” by the Prema pit wall. With the track temperature hitting 32C, the second half of the race was all about managing the full wet tyres to the chequered flag.

On lap 18 Amary Cordeel and Roman Stanek collided into turn 13, in an incident the stewards will investigate. However, the race was neutralised almost immediately after by a third and final Safety Car deployment.

Ido Cohen and Rafael Villagomez touched on their way into turn two, leaving both pointing the wrong way. Home racer László Tóth, unaware of Cohen’s stopped car, ran up and onto the Carlin, where his car came to a rest.

Both drivers appeared unhurt in the alarming incident, though Cohen was no doubt grateful for his car’s Halo. The pair were able to climb from their vehicles once attended by marshals.

Due to the difficulty of separating the cars, it was confirmed the race would concluded behind the Safety Car. Hauger followed Bernd Maylander over the line to secure his win, Leclerc claiming second and Doohan third.

One comment on “Hauger passes Leclerc for win at soaked Hungaroring”