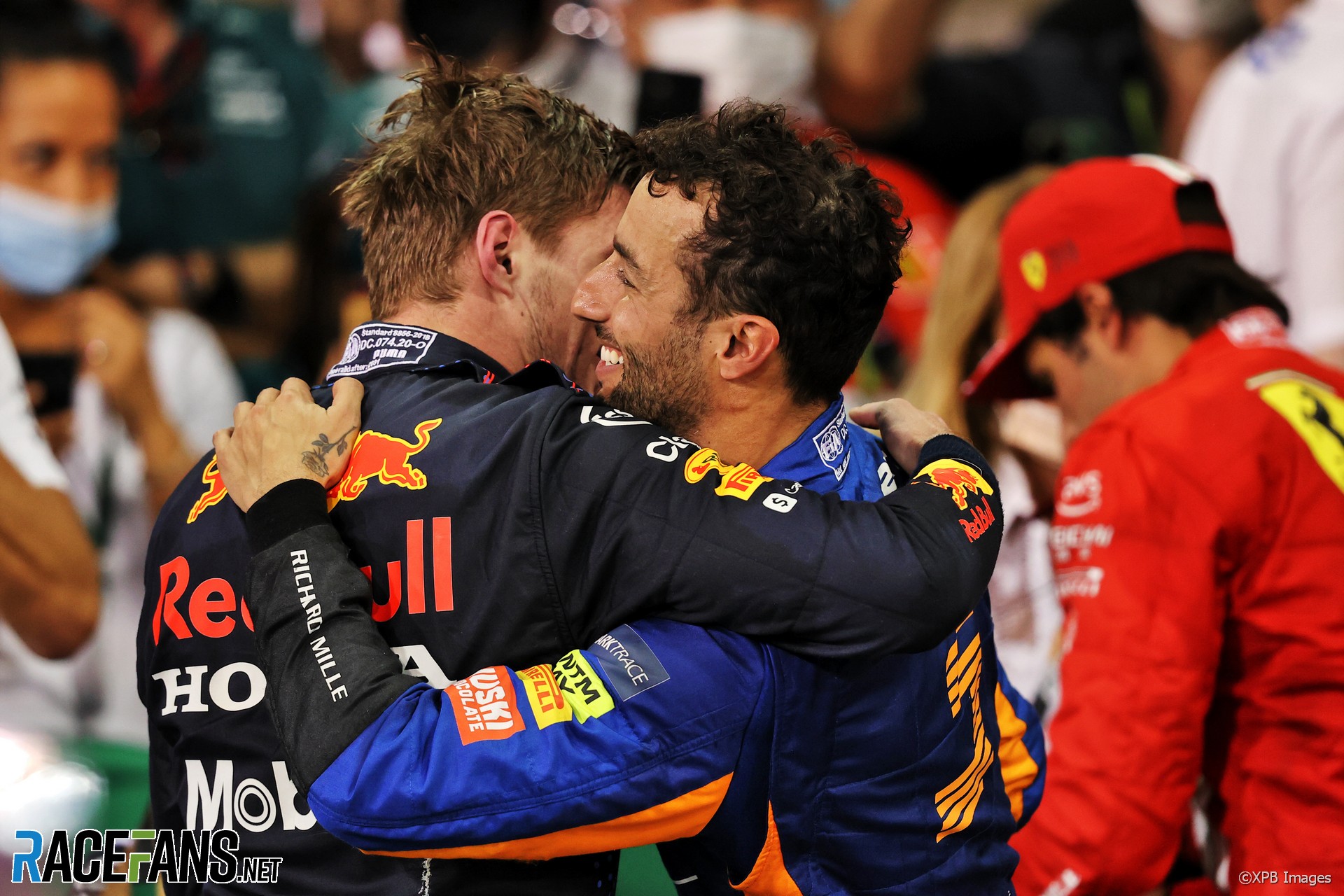 The remarkable scenes that saw Max Verstappen claim his first world championship title and the controversy prompted strong reactions from drivers across the motorsport world.

From fellow F1 drivers, past and present, to IndyCar, NASCAR, Formula E, the World Endurance Championship and beyond, here are how some of the most notable names in motorsport reacted to Verstappen’s championship victory.

Obviously, on one side, I want to congratulate Max, first time world champ. And obviously Red Bull, a team I know very well. So I am, of course, happy for them.

But I can’t say that in the same sentence and not say I feel for Lewis because he had the race under control and sometimes that doesn’t swing in your favour, the Safety Car. And it didn’t not only swing in his favour, it obviously cost him the title. So I do feel for him. It’s a crazy end to the year.
Daniel Ricciardo, multiple grand prix winner and Verstappen’s former team mate

Congratulations to both Lewis and Max because both deserved the world championship this year.
Sebastian Vettel, four-time world champion and Aston Martin F1 driver

Congratulations to Max Verstappen for winning the title. It was only a matter of time that he won the trophy and whilst there was some fortune in the incidents today, I think he is a deserving champion.
Fernando Alonso, two-time world champion and Alpine driver

I want to congratulate both Max and Lewis for their great season. I’m happy for Max, so a special congratulation for the Championship title.
Carlos Sainz Jnr, Ferrari driver

What a showdown! I love champions, records and stories that make my heart beat 300 beats a minute!

This is unacceptable! Max is an absolutely fantastic driver who has had an incredible season and I have nothing but huge respect for him, but what just happened is absolutely unacceptable. I cannot believe what we’ve just seen.
George Russell, 2022 Mercedes F1 driver

I’m extremely happy for Max and for this team because they have worked so hard throughout the year and for many years. Max really deserves this championship with the level he has driven at. I’m very happy to contribute to his title, he’s been a tremendous teammate and a great guy, I couldn’t be happier for him.
Sergio Perez, Verstappen’s Red Bull team mate

Huge congratulations to Max for winning the title. We raced with each other as kids as far back as karting. I know how strong he has been from the very start. It was just a matter of time before he achieved this and he deserves it.
Charles Leclerc, Ferrari driver

I’m really pleased for Max, we grew up racing together, we knew he would have been world champion one day and he did it today. It’s well deserved.
Pierre Gasly, AlphaTauri driver and Verstappen’s former team mate

All my congratulations to Max Verstappen for an amazing season.
Esteban Ocon Alpine driver

Huge congratulations to Max, it was such a tough battle throughout the season and I think he really deserved it today. I want to thank him also for giving this great result to Honda, as he’s given them the best way to celebrate their last year in F1.
Yuki Tsunoda, AlphaTauri driver

Wow what did just happen? What a hell of [an] F1 season! Congrats to an exceptional Max Verstappen. You’ve definitely shifted the boundaries this year. Also congrats to Lewis and Mercedes for this epic title battle and show!
Nico Hulkenberg, 12-year veteran of Formula 1 as race and test driver

So happy for Max Verstappen and everyone at Red Bull Racing. Fortune went our way today, but I must say the whole team deserve all of it! At the track and at the factory together we put so much work into this season. And huge respect to Lewis Hamilton, a class act on and off track.
Alexander Albon, Red Bull reserve driver

Neither driver deserved to lose that title yesterday.

Both have been outstanding this year but ultimately we must all congratulate Max Verstappen on his first world championship.
Karun Chandhok, former F1 driver and Sky F1 analyst

What a champion you are! The example of never giving up, beating, on a season like this, Lewis who was on top of his form is truly exceptional! Congratulations – so happy for you.
Jean-Eric Vergne, two-time FIA Formula E Champion

Obviously Max Verstappen deserved it just as much this year, but I don’t love any of the way that went down.
Alexander Rossi, 2016 Indianapolis 500 winner

Man, racing is wild when Netflix is making the calls! Both drivers put in championship seasons. Whoever won it was deserving. Regardless of how it ended, the fans were the biggest winners. It has to be said that Hamilton’s class in the face of what happened – and how it happened – is remarkable. Young drivers should take note. They should’ve thrown a red, let them change tyres (which is still a bad rule), and given everyone a five lap shootout to the end. They should look at IndyCar’s rule of dropping lapped cars to the back within a certain number of laps from the end.
James Hinchcliffe, IndyCar race winner

Max, you’re incredible. The whole country is proud of you and your historic season! Enjoy it mate.
Rinus VeeKay, 2020 IndyCar Series Rookie of the Year

And we give Steve [O’Donnell, NASCAR Executive Vice President] a hard time… [What the fuck] was that?

I said from the beginning of the season that it was gonna be tough for Lewis to get number eight! Boy was it, crazy way to end it! Congrats to Max Verstappen – What a season!
Darrell “Bubba” Wallace Jnr, NASCAR Cup Series race winner

Motorsport has been a lifelong interest for RJ, both virtual and ‘in the carbon’, since childhood. RJ picked up motorsports writing as a hobby...
Read more about RJ O'Connell, find all their articles and get in touch with them

83 comments on “‘Congratulations to Max but I feel for Lewis’: Drivers’ takes on the title-decider”