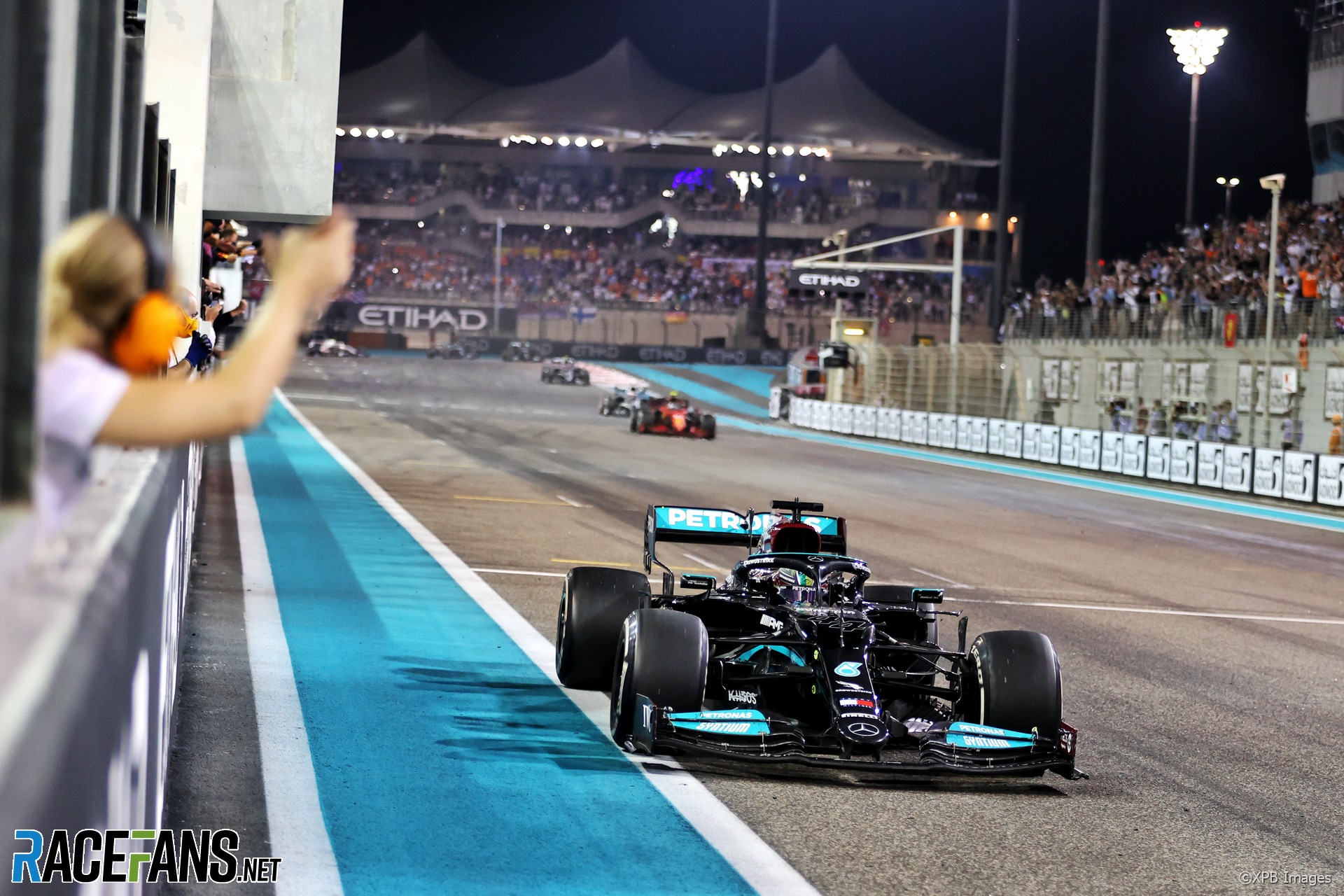 Mercedes team principal Toto Wolff did not hold back on the debacle which saw Lewis Hamilton lose the world drivers’ championship in excruciating circumstances at the Abu Dhabi Grand Prix.

“The decisions that have been taken in the last four minutes of this race have robbed Lewis Hamilton of a deserved world championship,” seethed Wolff yesterday. “Robbing him in the last lap of the race is unacceptable.”

Yet, despite Wolff and Mercedes’s palpable disgust at the injustice they believe their driver was dealt at the hands of race control on Sunday in the handling of the final safety car restart, the team decided against exercising their right under the sporting regulations to appeal the result of the race in the FIA’s International Court of Appeal (ICA).

Why were Mercedes unwilling to pursue a clear course of action to achieve sporting justice? Particularly as choosing not to dispute the events of the final five laps of last weekend’s race confirmed Hamilton’s year-long rival, Max Verstappen, as world champion.

The possibility of losing appears not to have been a concern. Wolff was adamant that, if the matter went to a civil court case and not simply a sporting one, the law would be on their side.

“We believe we had a very strong case,” Wolff explained. “If you look at it from the legal side, if it would have been judged in a regular court, it is almost guaranteed that we would have won.”

So what factors may have influenced the team’s decision to drop plans to take the matter to the ICA?

Maybe the most telling reason behind Mercedes’ hesitancy to take the matter further can be seen in Wolff’s doubts over the FIA’s appeal structure itself.

Unlike the vast majority of disputes commonly brought to the ICA – against penalties imposed by stewards for technical or sporting reasons – Mercedes were not seeking to contest the actions of a rival, but an FIA representative. Wolff made it clear he doubted whether the court would rule against the actions of the race director.

“The problem with the ICA is the way it’s structured,” explained Wolff. “The FIA can’t really mark their own homework. There’s a difference between being right and obtaining justice.”

Moreover, even if Mercedes won, Wolff wasn’t convinced they would gain restitution for the lost championship through the court.

“I don’t think that, at the moment, we are set up in terms of our governance to end up in a situation that would have given us a remedy that would have reinstalled the result that was taken away from Lewis before the last lap of the race,” said Wolff. “And that’s why, heavy hearted, we have decided not to appeal because we wouldn’t have gotten the result back.”

Of all the members of the Mercedes team, none had as much of a right to feel aggrieved by what took place last Sunday as Lewis Hamilton. Having been passed by Verstappen on the final lap with his fresh soft tyres after leading him throughout the entire race, Hamilton saw his hopes of an unprecedented eighth world title crumble over those final five kilometres.

Having sportingly congratulated his rival and attended the podium presentation, Hamilton promptly left the circuit and, at time of writing, has made no public statement on the race beyond on a few gracious words in parc ferme after the chequered flag.

Wolff says that throughout Mercedes’s response to the finish of the race, they have acted with their driver’s consent and cooperation.

“Every step of the way it was joint decisions,” Wolff said. “We decided together with Lewis to protest, to launch the appeal and to withdraw the appeal. As you can imagine, not only for him but also for us as a team, it was terrible to be confronted with a decision that decided the outcome of the world championship.”

As one of the most successful and celebrated racers in the history of Formula 1, Wolff knows Hamilton would prefer for the title to be won on the track.

“Nobody of us, neither him or us, want to win a world championship in the courtroom,” Wolff says. “But, on the other side, we were deeply wronged on Sunday, and it wasn’t just a case of a bad call, it was freestyle reading of the rules and it left Lewis like a sitting duck.”

Wolff said Hamilton’s strong sense of values and beliefs – both in racing and in wider societal issues – makes the decision not to challenge the result especially difficult to accept.

“It was tremendously hard for him and for us as a team to withdraw the appeal because we were wronged,” continued Wolff.

“We deeply believe that in Formula 1 – the pinnacle of motor racing, one of the most important sports in the world – justice is being done. So my soul and my heart cries with every bone that this should have been judged in the right way. A legal situation would have given us [as being] right. But there’s a difference between being right and obtaining justice.”

After a career in F1 spanning over 15 years where Hamilton has not spent a day free of scrutiny from media and fans alike, there is perhaps no one more acutely aware of the intense spotlight an appeal would place him and his team under. Until he publicly shares his thoughts on the contentious end to this year’s championship, this seems to have been just as much a driver decision as it was a team one.

It was not simply Mercedes and Hamilton who missed out on the world championship in large part due to the irregular actions of race control, but Mercedes’ shareholders, partners and sponsors too.

Having the ability to proudly display your logo on the overalls of the world champion is a major draw for marketing departments the world over. And for Mercedes, the expected additional financial boost from satisfying championship clauses would not be at all unwelcome.

Wolff indicated the teams’ backers had no qualms about the case going legal. “I’m so proud of the support that our sponsors and partners have given us over the last few days,” he said. “They’ve been with us all the way along.

“The message that I have received personally from sponsors, from fans, from very credible people made me very happy.”

Perhaps recognising the complexity of the situation the team has faced, it seems that Mercedes’ partners are sympathetic to their plight and backed the team’s choice.

“The sponsors have trusted us to come up with a decision in relation to the appeal and would have gone with us all the way,” Wolff insisted.

As egregious as the events at the end of the Abu Dhabi Grand Prix may have been, it was far from the only controversial impact of race control or the stewards had on the outcome of the season. But it may well prove to be the one that prompts actual change.

In walking away from an appeal, Mercedes welcomed a proposal by outgoing FIA president, Jean Todt, to hold a “detailed analysis and clarification exercise” into the incident. The team vowed to “hold the FIA accountable for this process.”

“There is a lesson to be learned,” said Wolff. “How can we make sure that, going forward, in situations like that the right decisions are being taken, the verdict from the stewards corresponds to the regulations and judgement in the courts – whether it is the ICA or the CAS [Court of Arbitration for Sport], which is not currently part of the legislations – can be judged in a way that is fair and neutral to every participant.”

With a newly-elected FIA president, Mohammed Ben Sulayem, promising structural change within the organisation, Todt’s promises must now be delivered by his successor.

It’s possible that the consequence of Mercedes not bringing their appeal to the ICA could be real and substantial change in stewarding or race direction in the sport heading to next season. That would be a welcome outcome after a contentious end to the 2021 campaign which even the FIA admitted ultimately “tarnished” the world championship.