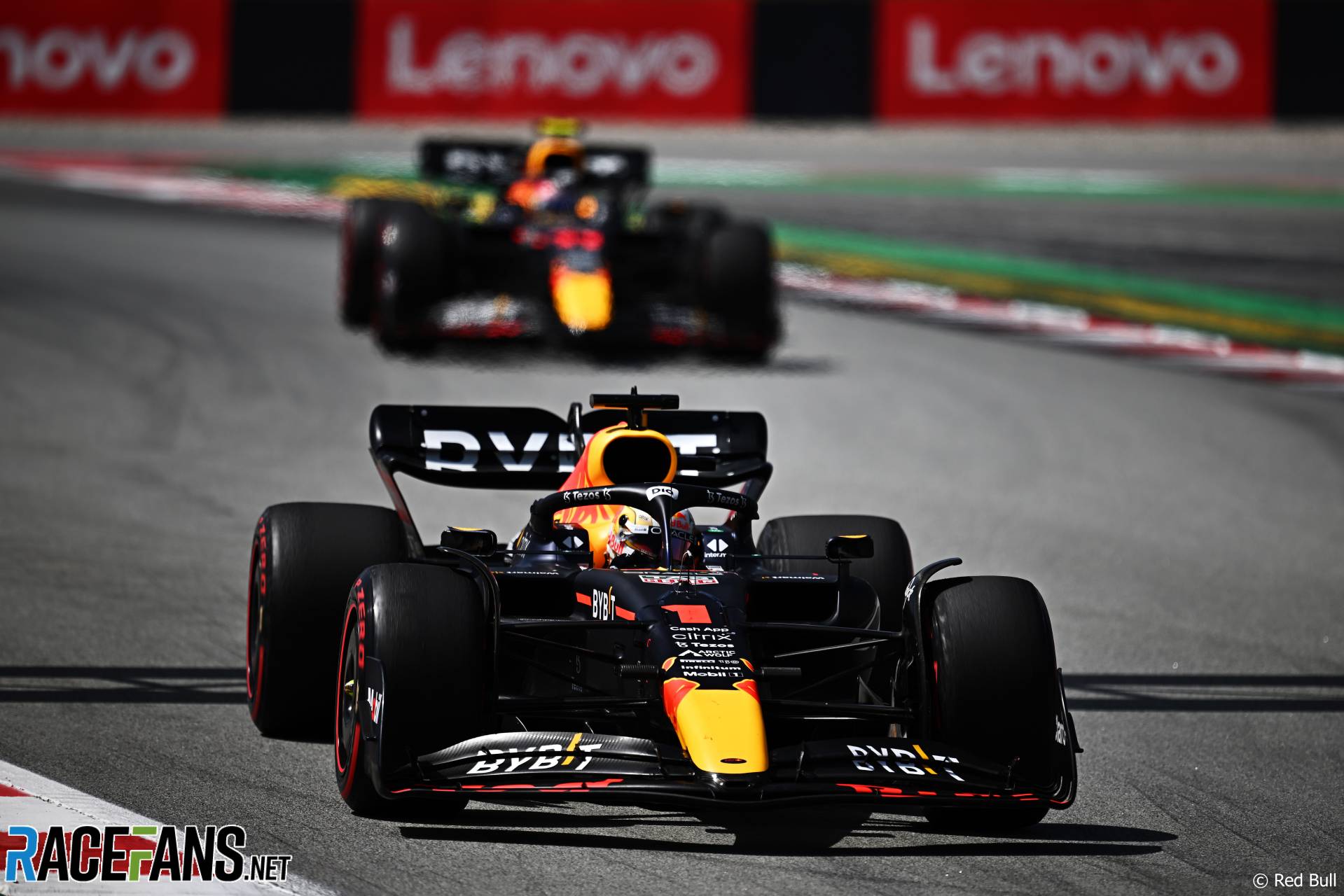 Red Bull brought home a one-two finish in the Spanish Grand Prix but had to navigate a few tricky moments during the race to get there.

Max Verstappen and Sergio Perez ran second and fourth in the opening stages. However a stiff gust of wind sent Verstappen off-track at turn four, dropping him behind his team mate.

That led to the first of two occasions on which Perez was told to let his team mate by. But as soon as Red Bull did that, a DRS problem Verstappen had suffered on Saturday recurred. That thwarted his efforts to pass second-placed George Russell.

The retirement of Charles Leclerc meant the three-way scrap between the Red Bull drivers and Russell became the battle for the lead. After the trio pitted, Verstappen continued to try to find a way past Russell. Meanwhile an unimpressed Perez, whose DRS was working, urged the team to let him past Verstappen.

Rather than do that, Red Bull opted to pit Verstappen again and leave Perez on a two-stop strategy. That meant in the final third of the race Perez held the lead while Verstappen closed rapidly on fresher tyres. Red Bull intervened again, telling Perez to let his team mate by. Verstappen went on to win.

Here’s how the race unfolded on their radios.

Verstappen made no remark when he skidded off the track on turn nine, though Red Bull were quick to warn Perez about the gust of wind which had caught out his team mate.

As Perez tried to pass Russell, Verstappen appeared on his tail. The champion quickly pointed out to his team that he felt he was quicker. Red Bull gave Perez one more chance to pass the Mercedes before ordering the switch.

Verstappen’s DRS failed to deploy when he tried to pass Russell. The Mercedes driver then pitted, and Red Bull responded by doing the same, rather than leave Verstappen out to gain the position on-track.

While Verstappen was frustrated forlap after lap by his DRS problems, Perez emerged from the pits and caught his team mate and Russell again.

With fresher tyres and working DRS, Perez urged Red Bull to let him past. Meanwhile Russell’s firm defence was infuriating Red Bull, who accused him of breaking the rules, though the stewards noted nothing of concern about his defensive moves.

As Perez continued to lose time behind his team mate, he reminded his race engineer of his earlier words that he would get payback for letting Verstappen through. Red Bull opted to bring Verstappen in for his second pit stop, which cleared the way for Perez to pass Russell, which he did quickly.

Verstappen was much quicker on his fresh set of tyres, and cut around one-and-a-half seconds per lap out of Perez, who was being told to manage his rubber, as it would have to last longer on his two-stop strategy.

Verstappen realised the advantage his three-stop strategy would give him over the two drivers he was racing against. However Perez was already being told he was in a “different race” to his team mate.

Perez continued to ask for updates on the gap between him and Verstappen as his team mate’s final pit stop approached. After he came in, Verstappen emerged within six seconds of the other Red Bull.

Red Bull made it clear to Perez as soon as Verstappen got within striking distance of him that he would be required to let his team mate by. Perez was not impressed with his second order to give way, calling it “very unfair” but complied.

When Russell made his third pit stop, Red Bull responded with another for Perez, which allowed him to take the fastest lap of the race, scoring a bonus point. That ensured a maximum score for Red Bull.

Verstappen was told to avoid using DRS, as Red Bull were no doubt concerned the malfunctioning system could fail and force him out of the race.

The pair brought their cars home and scored a one-two for Red Bull. Verstappen thanked his team mate, but Perez made it clear he wanted to discuss the circumstances behind the two calls to make way for the team’s other car.

Become an RaceFans Supporter today and browse the ite ad-free. Sign up or find out more via the links below:

65 comments on ““Why won’t you let me by?” Team orders and DRS dramas on Red Bull’s radio in Spain”