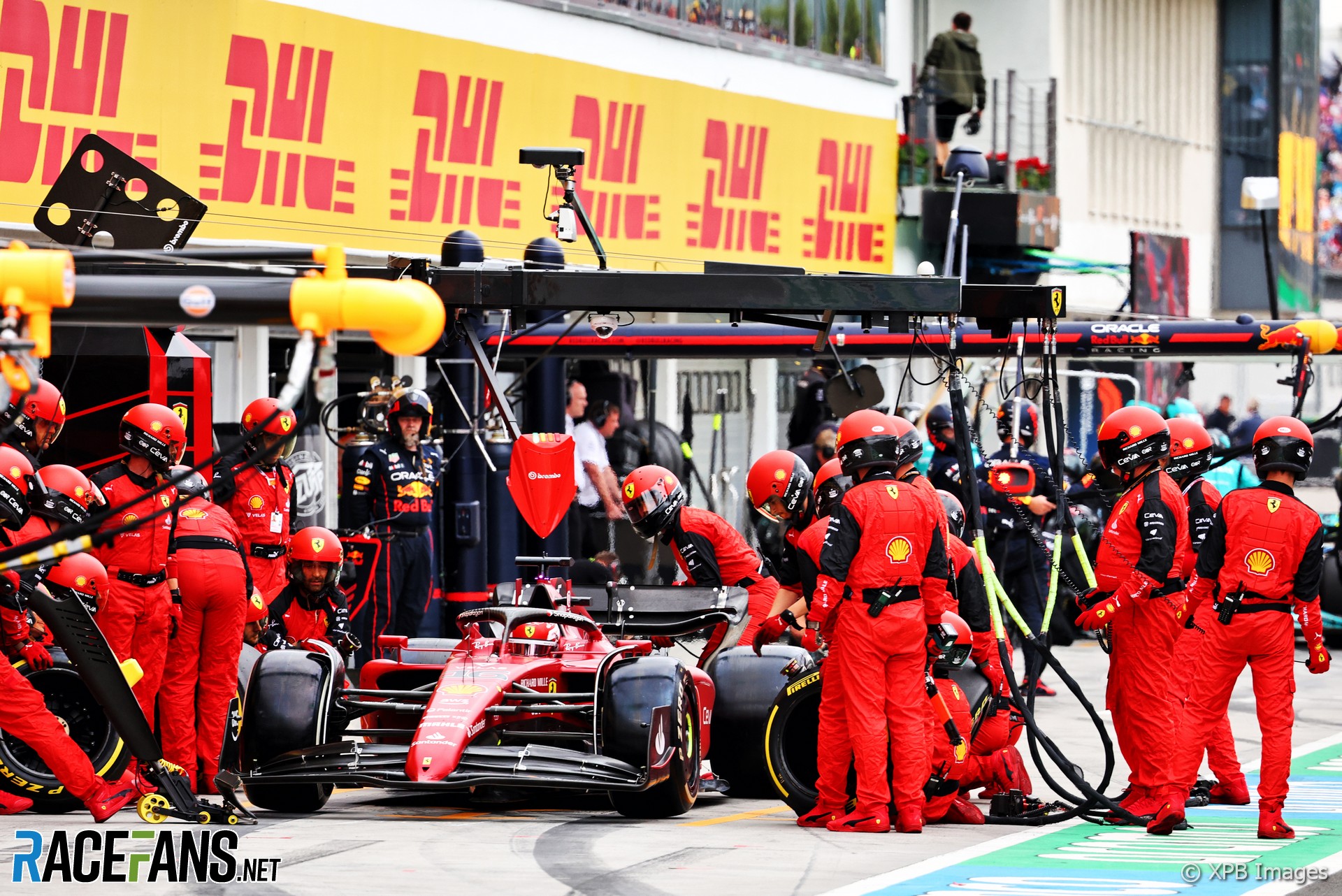 Ferrari’s decision to put Charles Leclerc on the hard tyre for his third stint during the Hungarian Grand Prix was seen by many as a tactical error which cost him victory in the race.

After fitting the hards Leclerc immediately struggled for grip, was passed by championship rival Max Verstappen twice and had to make a third pit stop which left the former race leader sixth at the finish.

However the poor performance of the hard tyre did not take Ferrari completely by surprise. As the transcripts of their radio messages from the race shows, Ferrari advised Leclerc to look after his medium compound tyres during the second stint, potentially hoping to extend it, and warned him it would take longer to warm the hard tyre up then they originally expected.

Ferrari were also preoccupied with the progress being made by Verstappen, who despite starting 10th on the grid was able to stay within a few seconds of Leclerc. Despite their growing concerns over the performance of the hard tyre, having observed the difficulties Haas and Alpena experienced with it, Ferrari decided it was a risk worth taking.

They were led to take this decision partly by calls they had made earlier in the race. During Leclerc’s first stint Ferrari asked him how long he could keep up his current pace on the medium tyres. Although he told them he could go for seven or eight more laps, and his lap times did not significantly drop off after that, Ferrari nonetheless pitted him after just two more laps. That kept him ahead of Verstappen but lengthened his later stints, making the soft tyre a less attractive option.

Had Ferrari not shortened Leclerc’s two earlier stints, he might have made his second pit stop late enough to use the soft tyres instead of the hard. That was, of course, the strategy Ferrari put his team mate Carlos Sainz Jnr on, once Leclerc’s bitter experienced showed them the performance of the hard tyres was even worse than they feared.

Leclerc kept his position behind leader George Russell and Carlos Sainz Jnr at the start. Russell started the race on soft tyres and by lap 10 the medium-shod Ferraris were closing in on him.

Leclerc closed on Sainz more quickly than his team mate gained on Russell, a point the chasing Ferrari driver made sure his team picked up on. Behind them Lewis Hamilton and Max Verstappen, recovering from poor grid positions, passed Norris to enter the top five.

When Russell pitted to discard his soft tyres Sainz and Verstappen immediately reacted. Sainz later suggested his slow pit stop cost him the change to pass Russell, but in fact there was almost nothing to choose between the total time both spent in the pits.

As Sainz had pitted first of the two Ferraris, the logical option for Leclerc was to pursue an alternative strategy as far as possible and run longer. Asked how much further he could take his original set of tyres at his current pace, Leclerc said they were good for at least seven more laps.

However just two laps later, with Leclerc lapping only a few tenths of a second slower, Ferrari brought him in. That ensured Leclerc emerged in front of championship leader Verstappen and also jumped in front of his team mate, thanks in part to his visit to the pits taking a second less than Sainz’s had.

Leclerc, running on another set of medium compound tyres, was now second behind Russell, who he quickly caught.

It took Leclerc several laps to pass the Mercedes, however, during which time he lost crucial time to Verstappen. By the time Leclerc was leading, Verstappen was only five seconds behind.

With clear air, Leclerc gained another two seconds on Verstappen by lap 37. Meanwhile Ferrari had kept an eye on the likes of Haas and Alpine who had already run the hard tyre and realised the compound Leclerc was due to use for his third and final stint wasn’t performing as well as they hoped it would. They let him know.

Within a few laps Verstappen made his second pit stop. Ferrari had two clear choices.

One was to leave Leclerc out until he could fit softs and run to the end, which risked dropping him behind Verstappen and might already have been compromised by his shortened first stint. The alternative was to bring Leclerc in immediately, ensure they stayed ahead of Verstappen, and risk running the hards. They chose the latter.

Leclerc immediately struggled to get the hard tyres up to operating temperature. Verstappen breezed past him. Ferrari, whose data told them the performance of the hard tyre would improve later in the stint, reassured him.

Shortly after Verstappen passed Leclerc the team was handed a gift. Verstappen made a rare error, spinning at turn 13.

With that, Leclerc was back ahead. But, it turned out, not for long. He left his team in no doubt he was unimpressed with the hard tyre’s performance. He pressed on, trying to coax them into life, but once Verstappen got past Leclerc’s lap times never recovered and soon Russell began to close on him again.

The Mercedes driver pressured and eventually passed Leclerc. With that, his patience snapped, and he told his team to consider a change of strategy: A third pit stop, for soft tyres.

Neither his team mate nor either of the Red Bull or Mercedes drivers touched the hard tyre or resorted to a third pit stop. Leclerc fell to sixth, his race seemingly ruined, though fifth-placed Sergio Perez gave him something to aim for.

Leclerc’s gains on Perez were gradual. However a Virtual Safety Car period late in the race due to Valtteri Bottas’s retirement brought him onto the tail of the Red Bull.

The Ferrari never got close enough to strike, however, and a dejected Leclerc ended the race less than half a second behind Perez.

RaceFans is run thanks in part to the generous support of its readers. By contributing £1 per month or £12 per year (or the same in whichever currency you use) you can help cover the costs of creating, hosting and developing RaceFans today and in the fture.

54 comments on “Transcript: Why Ferrari told Leclerc ‘the hard is worse than expected’ but still used it”