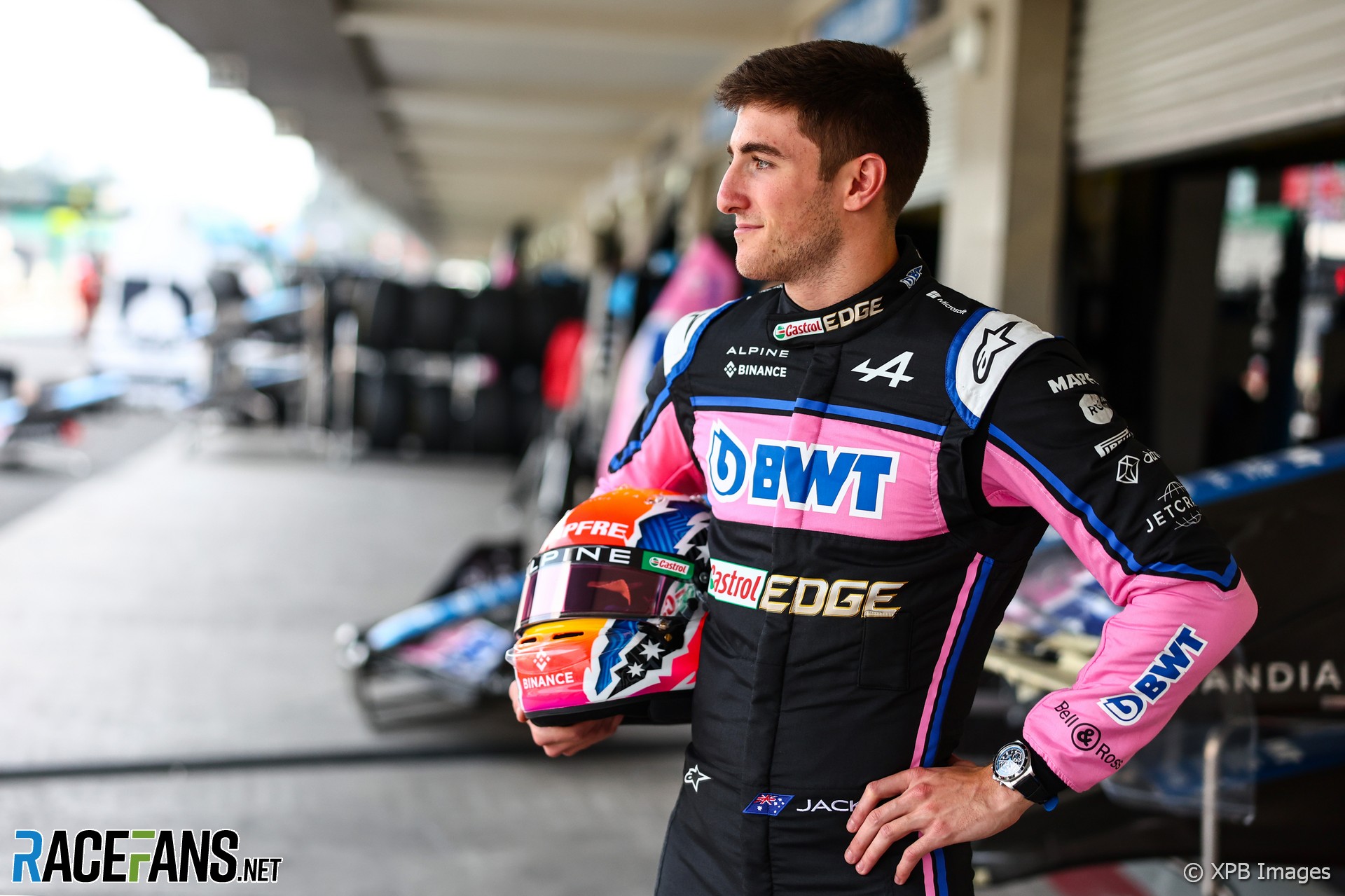 When Alpine’s announcement that Oscar Piastri would make his Formula 1 race debut for them in 2023 was publicly contradicted by the driver, another member of their junior roster sprang into action.

Jack Doohan knew it was his opportunity to replace Piastri as the team’s leading reserve driver, and potentially even claim a race seat for the 2023 F1 season.

That may not have materialised but Doohan, who did not expect to run in F1 practice at the start of the season, nonetheless earned the chance to make his debut in yesterday’s session at Autodromo Hermanos Rodriguez.

Speaking to media including RaceFans after his “really cool” first outing, Doohan said he had been readying himself for the opportunity since Piastri turned down Alpine. “I’ve been preparing myself, trying to make my way into this paddock since, obviously, the news broke at the start of August. I’ve been aiming towards this so the nerves that I’d say usually would be, jumping from Formula 2 to Formula 1 and that being such a big thing, were a little bit less, just because I was trying to put myself into a position where this is where I want to be. I want to be driving Formula 1.

Doohan felt more nervous when he learned of his practice opportunity than when he made his practice debut on Friday.

“Obviously, when I hopped in the car and I was pulling out of the garage there was a lot of excitement, a lot of joy, heaps of emotions going on. But once I was out on track that got kind of flushed away. And that was hard to describe, really, what I was feeling, but it was a really cool sensation.”

The opportunity would not have come about had Doohan not immediately realised the implications of Piastri’s denial, early in August, that he would become an Alpine driver. Once he saw the post from his fellow Australian, Doohan knew his next career step rested on getting in touch with Alpine CEO Laurent Rossi.

“All that news obviously broke,” he recalled. “I didn’t have Laurent’s number or anything. So I actually sent him a DM [direct message] on Instagram, basically this huge, big, long paragraph saying why I think I could be a candidate going forward.

“He replied at like 3am – I think he was in the US or somewhere – with his number at the bottom and that we should chat in the coming days.”

Doohan followed up his enquiry with Alpine team principal Otmar Szafnauer, who had seen first Fernando Alonso then Piastri slip through his fingers in a matter of days, and was in need of a driver for 2023. “I spoke to Otmar the following night briefly and every day I was trying to speak to whoever I could in all parts of the Formula 1 team and in all parts of structure, through the academy.”

Given his lack of experience, Doohan knew he was an outside candidate for the 2023 race seat, which eventually went to Pierre Gasly. However, he saw a chance to improve his position within the Alpine driver roster.

“It was an opportunity and even if it was a farfetched one, at least now with the seat obviously being closed off and Pierre taking it, I know that I’m not sitting here thinking ‘I wish I pushed a little bit more, I wish I tried.’

“For a solid six weeks I was doing absolutely everything I could to try and secure myself in the seat. I know that me, my father and the team around me that I have we gave it our all to try and secure it, so I’m happy about that,” he continued. “And in the end, good things came out of it and I ended up coming even more forward – even though I didn’t get the seat – than where I was before.”

His efforts to further integrate himself into Alpine also helped with his F2 season, said Doohan, where he is now fourth in the standings with one round remaining in Abu Dhabi.

“I was, at that point in time, ninth in Formula 2, not in really a position to go to Formula 1, and the guys were saying it’s probably highly unlikely, we’ll focus on Formula 2. I emailed the chief engineer, Ciaron [Pilbeam] and I said, ‘do you mind if I sit in on the pre-FP3 briefing or pre FP1 briefing and for Saturday?’ And he said, ‘yeah, for sure’.

“So I started from there, embedding myself more into the team and really trying to understand how the weekend falls into place and and basically trying to take in as much information as I can.”

Discovering the level of complexity F1 teams work at has made it easier to comprehend the simpler world of F2, where the range of set-up options available to teams is far smaller.

“When I was coming back to Formula 2 and things are just so much more simple, the information coming from engineer to driver, and also everything that I was taking in was so much less. So I think that was helping me as well.”

Doohan has no qualms about being passed over for a drive next year in favour of Gasly. “I completely understand the decision that they took to take Pierre,” he said. “He has a lot of experience and I’m sure it will bring great things to the team and hopefully they can have a really successful season next year.”

Before Piastri left, any possible promotion for Doohan looked “like a two year project”, he said. “Wherever I ended up was going to be a bonus. I would have loved to have been in the seat but who knows? Everything happens for a reason.

“Maybe now I’ll be more ready than ever when that time comes available and it’s good to know that I do have the support from the team to know that I can be branched out if that were the case and if the opportunity became available.”