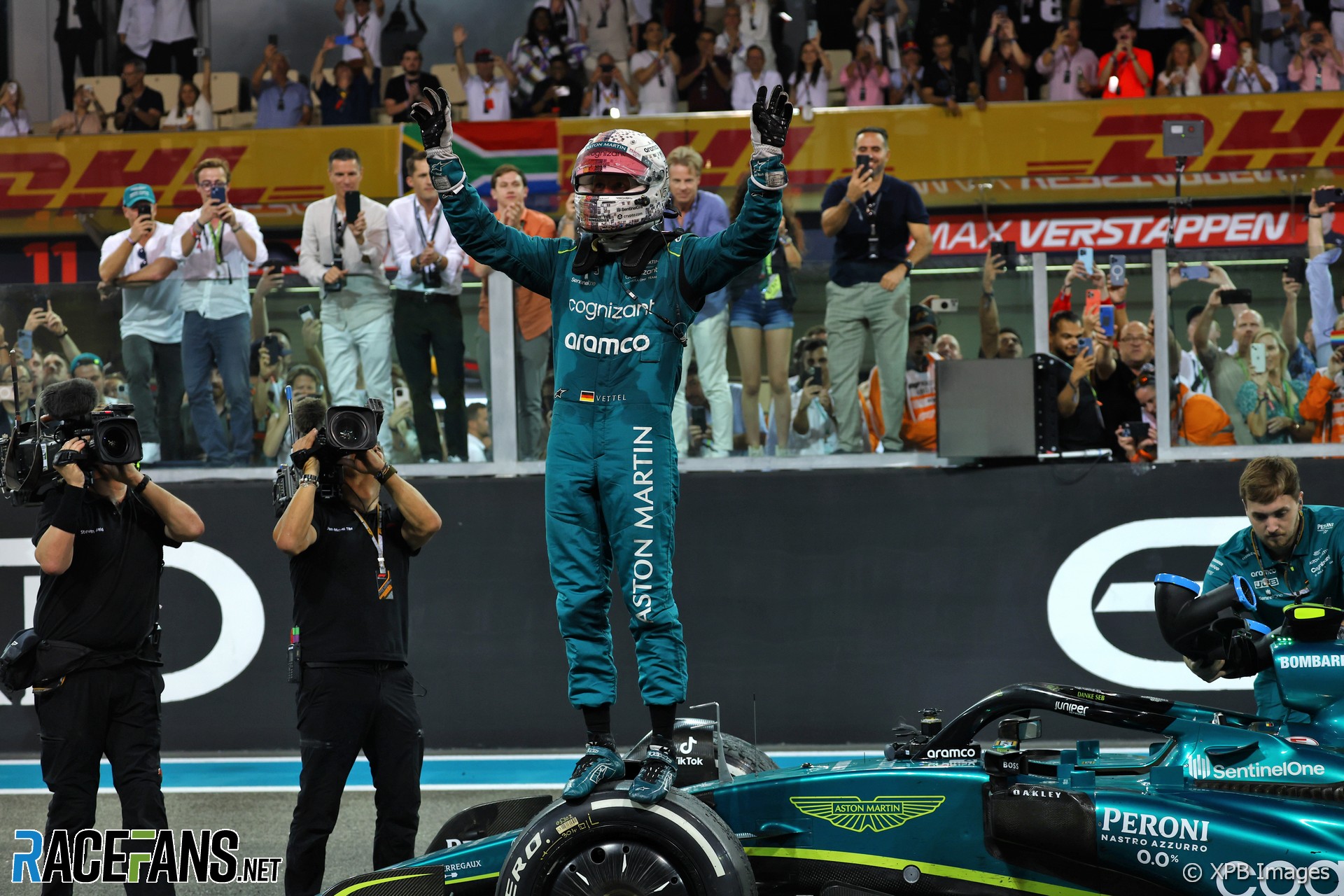 The Formula 1 paddock said farewell to four-times world champion Sebastian Vettel with tributes throughout the Abu Dhabi Grand Prix weekend including a lap of the circuit on foot on Saturday evening. 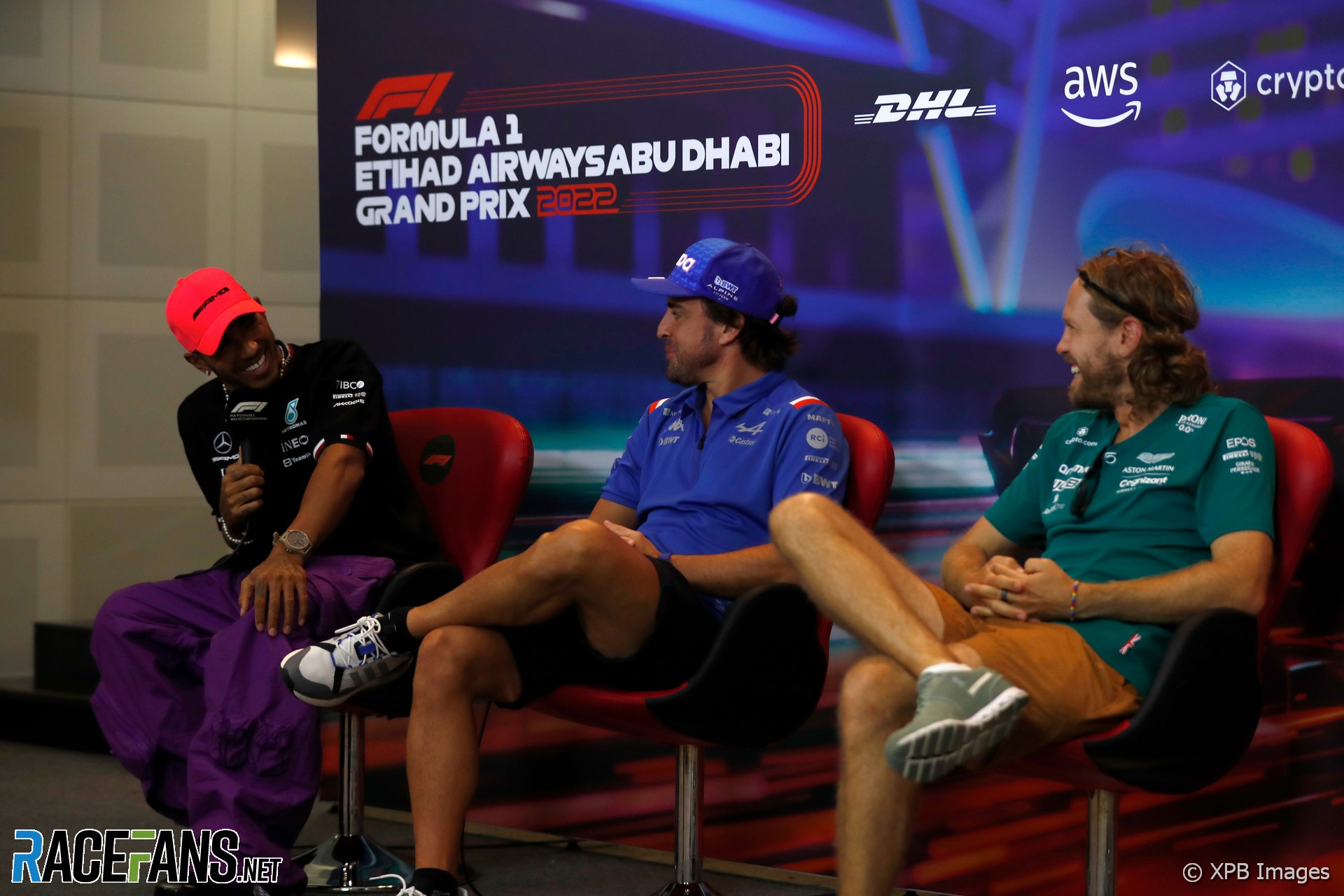 The heat in Abu Dhabi is far stronger than I’ve ever experienced. This year’s race is running earlier in November than usual due to the World Cup also taking place through the final weeks of the month. 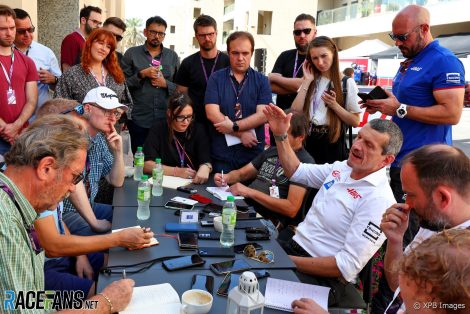 I arrive early at the circuit to confirmation that Mick Schumacher is to be replaced by Nico Hulkenberg at Haas. The team schedules an early media conference with Gunther Steiner, who is in his typically buoyant mood, not least because it brings an end to questions over who’ll be driving for him next year.

The press conference had those ‘last day of school’ vibes we always talk about at this point in the season. Vettel, Lewis Hamilton and Fernando Alonso were placed in one group together. Jokes were flowing between the three on Vettel’s final press conference of his career and you could see how close the bond was between Hamilton and the four-times world champion. As Nicholas Latifi was speaking I spotted Hamilton raise his phone to take a photo of himself, Alonso and Vettel, with 13 world championships between them.

The atmosphere changed, however, when the current world champion took to the stand. Furious at the coverage of his refusal to follow Red Bull’s order to let his team mate pass him on the final lap in Brazil, Max Verstappen tore into the media.

Interviews continued into the early evening, many journalists evidently already thinking ahead to their season reviews. We ended the day at a social event very kindly put on by Mercedes on their roof terrace, while the lights began to glitter on the water overlooking the W Hotel and harbour. 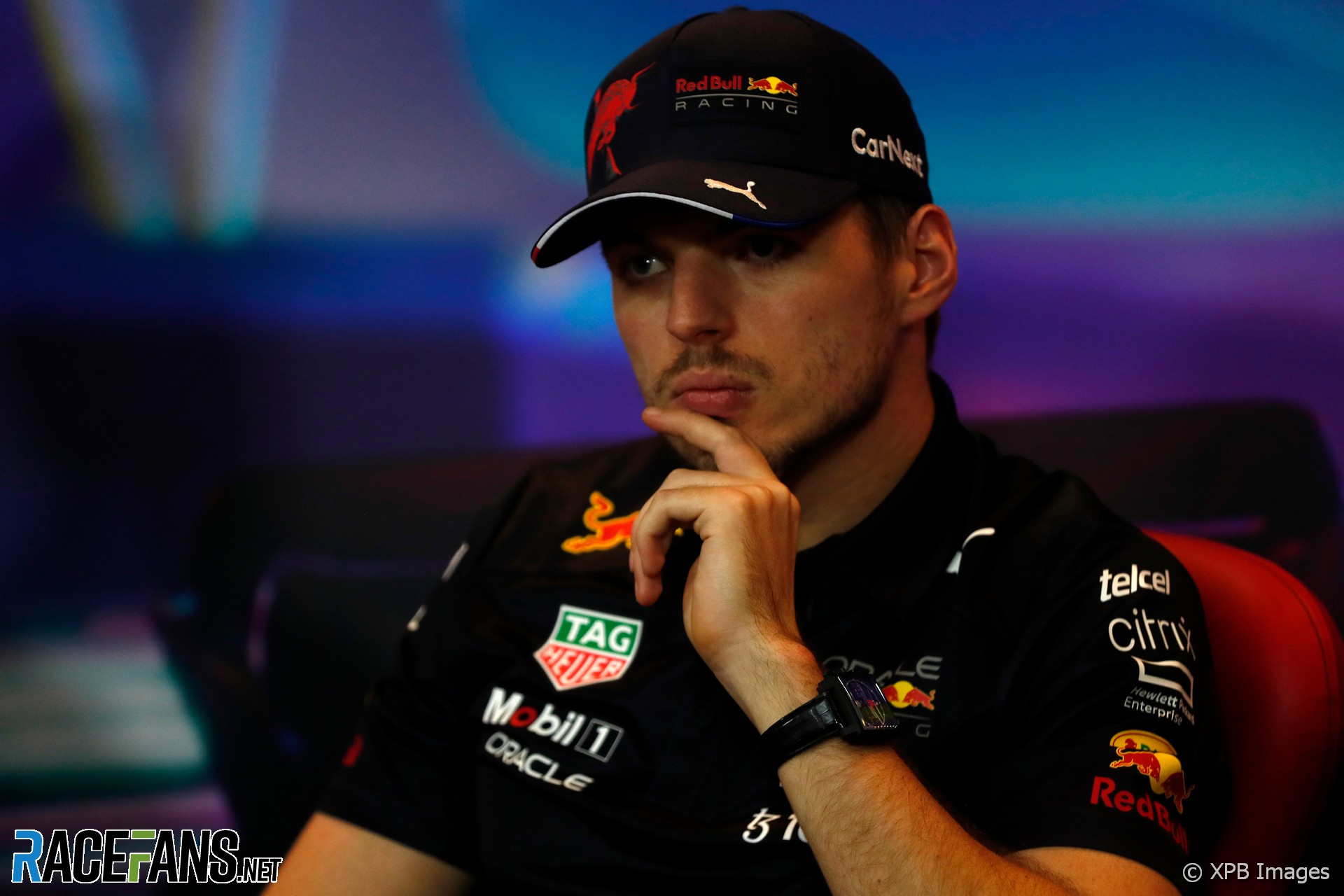 Friday started with a trip down to the paddock to start thanking everyone I had worked with over the past year. F1’s hectic, global schedule makes the paddock a close-knit environment, and at the end of the season, it’s sometimes hard to make sure you thank everyone for their time and energy.

Perched on a chair in the middle of the paddock, I watched the drivers arrive for practice for the last time that season. Vettel coolly strutted past, smiled and nodded in acknowledgement as he was pursued by a smattering of fans looking to get a picture with the departing driver.

Later that evening on the way to dinner I spot F1 CEO Stefano Domenicali stepping out of a car and going to a far fancier restaurant than ours. Stopping to say hello, I was struck by his outfit of double denim. We’re so used to always seeing people in team gear, and sometimes they’re almost unrecognisable when you step out of the paddock. This outfit definitely caught my eye. 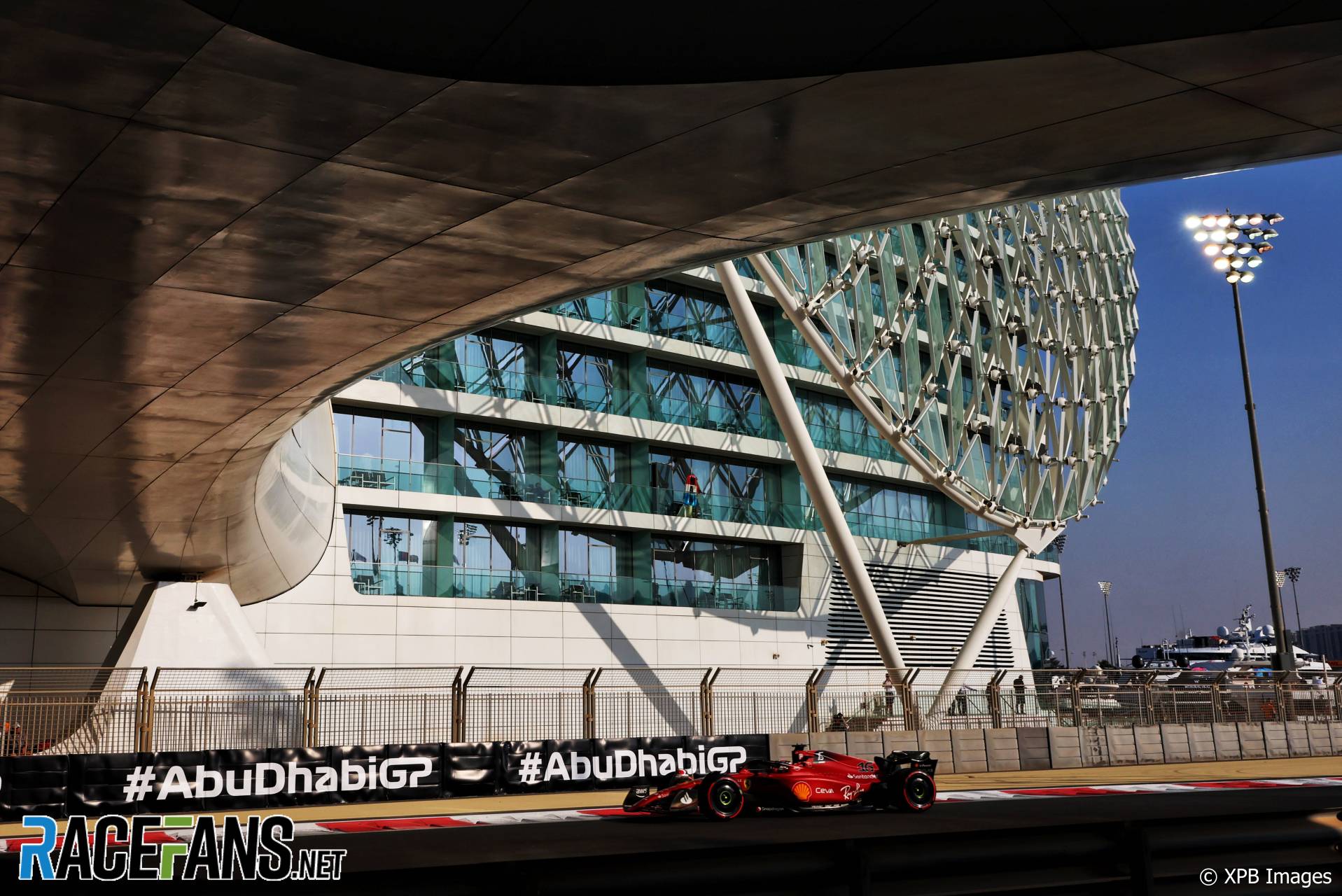 For the final practice session of the season, I opt to brave the blistering heat and go trackside – it’s my last chance this year. Heading towards turns 13 and 14 – the left-handers either side of the track-crossing hotel – I was struck by how close the cars came to the barrier at the exit. I pressed on to turn 11 but had to stop – the heat was too intense to continue the trek to turn 10 and I had to admit defeat, desperate for some water. 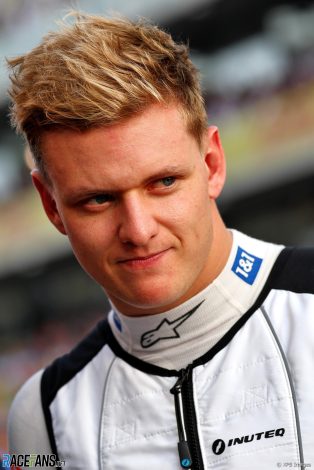 The media scrum after qualifying was busy with many keen to get the last few words to Vettel, who had done himself proud by taking his Aston Martin into Q3. I don’t mind admitting a tear came to my eye and trickled down my cheek – I quickly wiped it away as he entered the pen. Clearly his coming departure had affected me more than I had expected.

Another driver in his final F1 race weekend – for now at least – was Mick Schumacher. He inevitably faced many questions about his future, which he answered as calmly as ever.

I asked if he had heard the comments Mercedes team principal Toto Wolff made that morning in the FIA press conference. Wolff had spoken about his desire to bring Schumacher on board and how keen he was to add his talent to their team. After admitting he hadn’t heard it, I urged him to take a listen to the kind words. Appreciative, he gave me a wink as he mouthed ‘thank you’ as he left. I hope we see him back in the paddock next year.

After the media sessions were over, Aston Martin invited us to an event put on by Vettel with a chance to run or walk the track with him. Unable to join in having sprained an ankle a few days before flying out, I waited at the finish line. The atmosphere was incredible as each team member completed the five-kilometre jog, dripping with sweat. Most were immediately met by a bear hug from Vettel, having formed many relationships within the paddock during his time in F1.

I’m not usually one to ask for autographs, but four-times world champions don’t bow out of the sport every weekend, so this was clearly a case of ‘mitigating circumstances’. Vettel politely agreed to sign my 2022 F1 pass. I thanked him for his immense contribution to F1 and left him to continue with the event. He stayed until pretty much everyone had crossed the line before eventually leaving the start-finish straight alongside his partner and their three children. 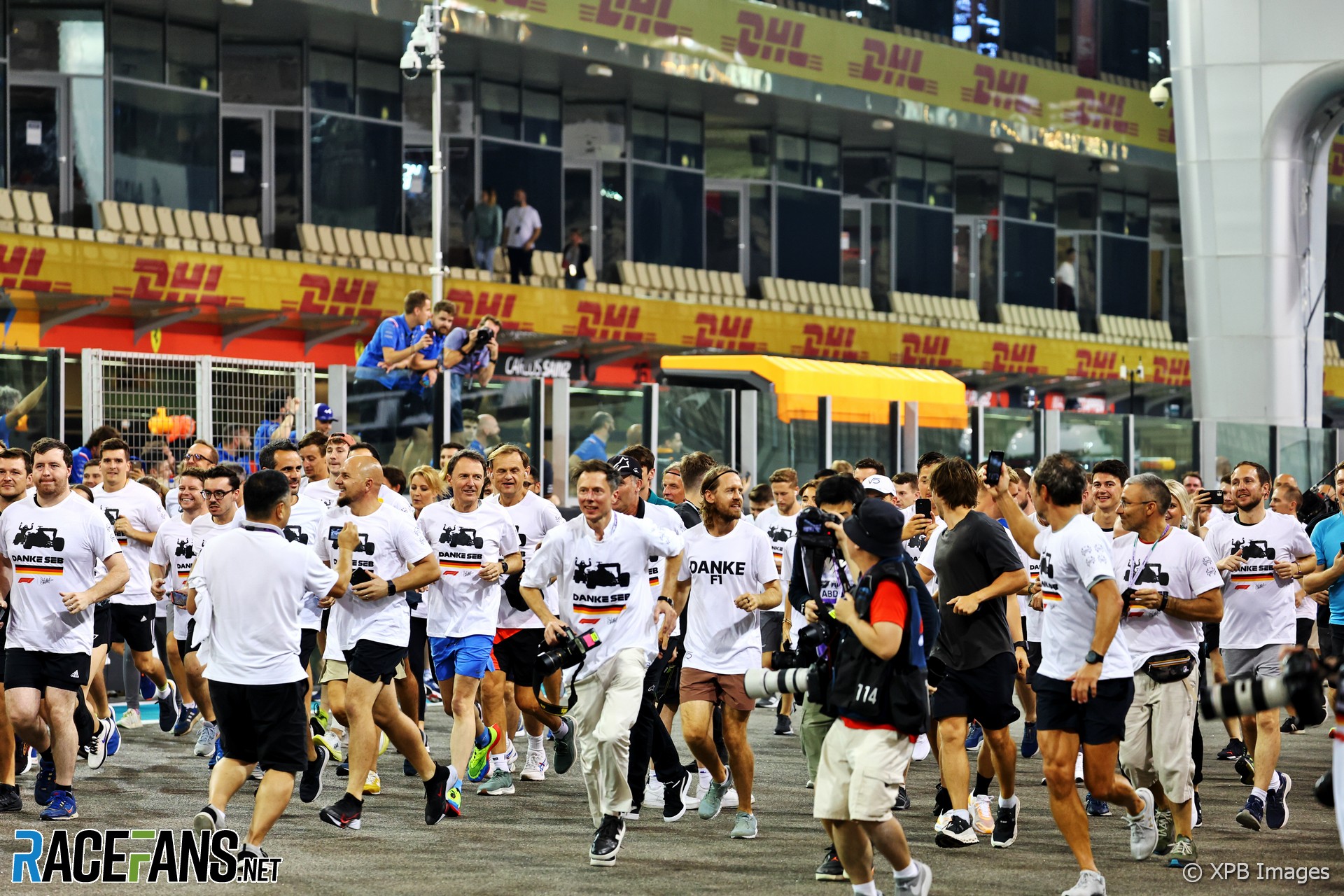 A late start time for the race meant there was plenty of time to catch up with people at the start of the day. Stepping on to the grid for the final race of the season I noticed quite a few of the grandstands were only half-full. The grid however was packed with celebrities and VIPs – I caught a glimpse of cricketers Ben Stokes, Joe Root and Jimmy Anderson.

As usual I watched the start of the race from the media centre, then made my way out to speak to the drivers once someone retired. Not for the first time this year, Alonso’s race was over well before the chequered flag.

The media pen was a scrum: Vettel, Schumacher, Daniel Ricciardo and Latifi had all driven their last F1 races for the foreseeable future. As Vettel sauntered over, I caught his eye early and was able to get a few final questions in with him before he was whisked away.

Next was Hamilton, who had just had his Mercedes fail on him and was unable to finish the race. Looking down however I saw he had the words “good luck” written on his socks, my assumption being this was for Vettel. Despite asking a few of the team, I never did get to the end of it. As the fireworks faded we had a few final media sessions with Aston Martin’s Mike Krack and Red Bull’s Christian Horner, the latter enjoying his team’s 17th victory of an astonishing season. After that I was due to wave goodbye to the paddock. No doubt within a few weeks we’ll be chomping at the bit to be back in the paddock, but for now, it was “see you next year, and have a wonderful Christmas break” as we all set off for some well-earned rest.

As I was leaving I bumped into Toto Wolff, who opened his arms and gave me a huge hug. Touched I had made such an impression on the Mercedes team boss I thanked him for all of his answers over the year, before offering a quick “good luck” to a passing Schumacher who was heading into Aston Martin, presumably to see Vettel.

Not long afterwards, another figure made for the Aston Martin hospitality area: none other than Fernando Alonso. The 2023 season is go already. 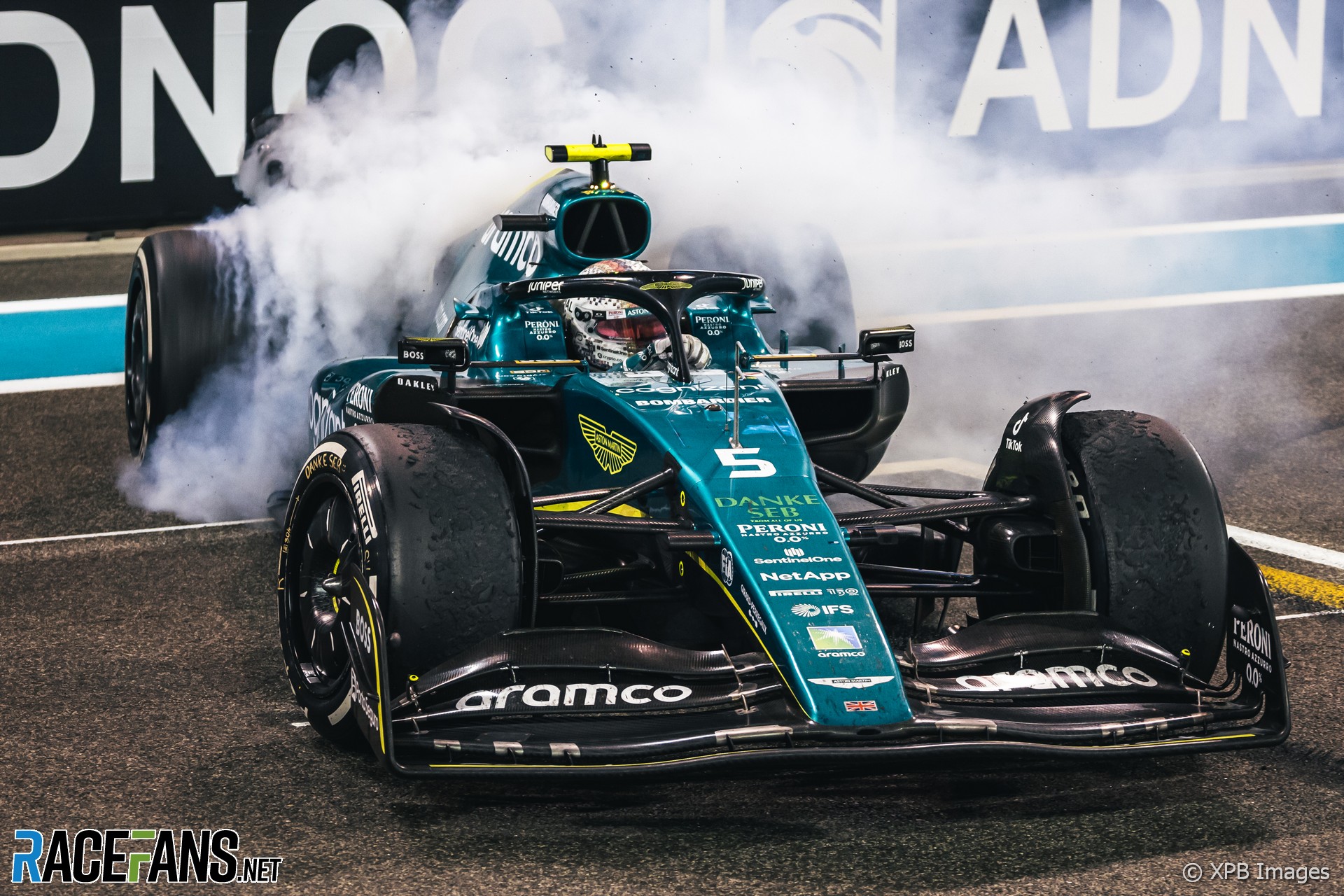