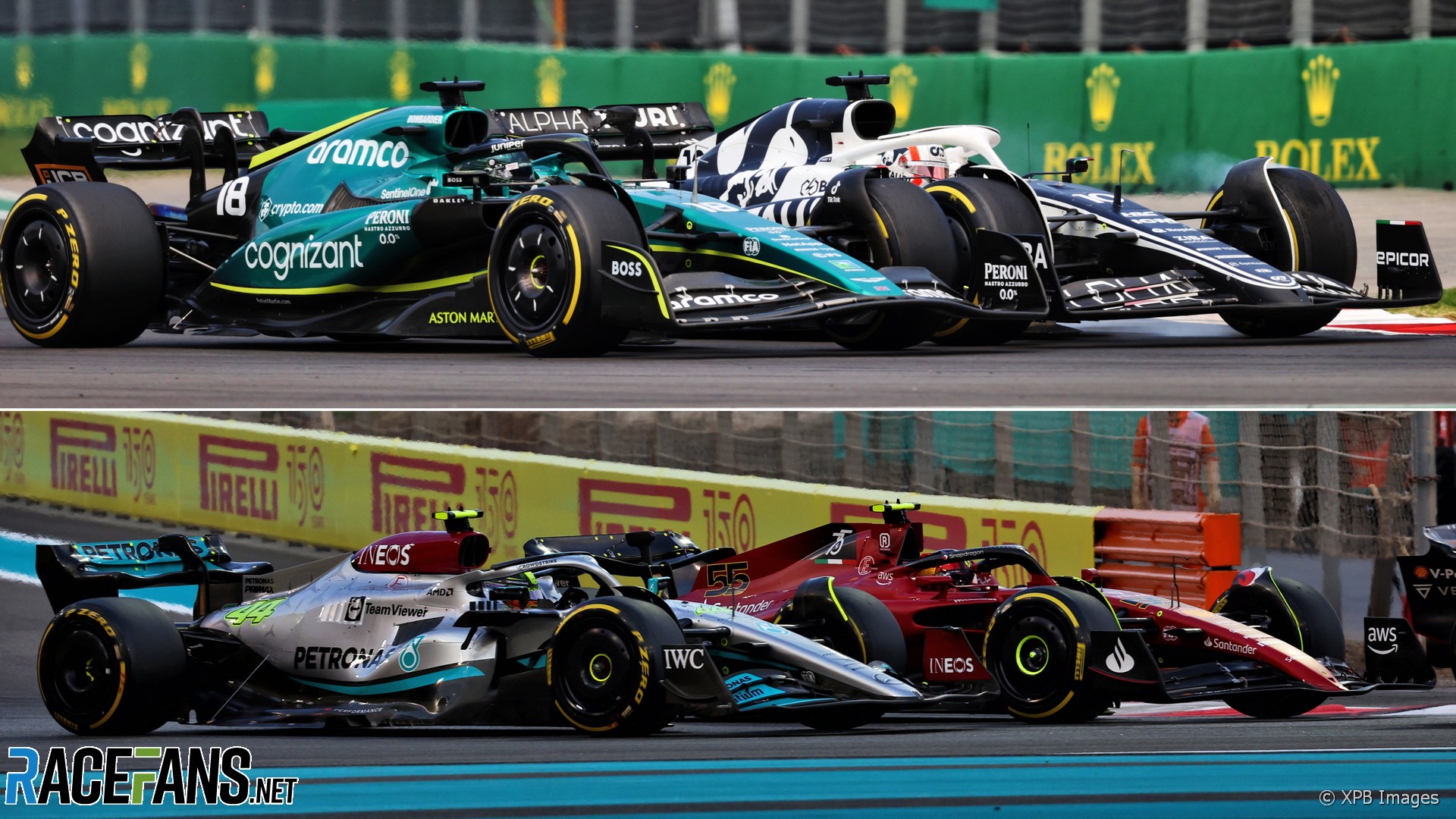 Disagreement over how the rules of racing are enforced in Formula 1 reached a boiling point at the final race of the 2021 season, prompting the FIA to make many changes for 2022.

One small but important change concerned what should happen if a driver leaves the track and by doing so either passes a rival, gains grounds on them or avoids losing a position to them. At the opening race of the championship in Bahrain, Wittich informed drivers and their teams that the race director would no longer tell them when to give up any positions gained or retained illegally. From then on it would be up to teams or drivers to voluntarily return places achieved by an illegal advantage, or risk receiving a penalty.

But by the end of the year this was no longer than case. During the Abu Dhabi Grand Prix Lewis Hamilton appeared to cut the track to retain a position over Carlos Sainz Jnr on the first lap. Mercedes consulted Race Control and were informed that Hamilton would be penalised if Mercedes did not tell him to yield to Sainz, which they subsequently did.

That appeared to be a completely different approach than had been taken in Mexico after Pierre Gasly was involved in a similar incident with Lance Stroll. Instead, the AlphaTauri driver was hit with a five-second time penalty for failing to return the place to Aston Martin.

Why were these two similar incidents seemingly handled differently, and do other events earlier in the year shed light on the thinking behind those decisions? 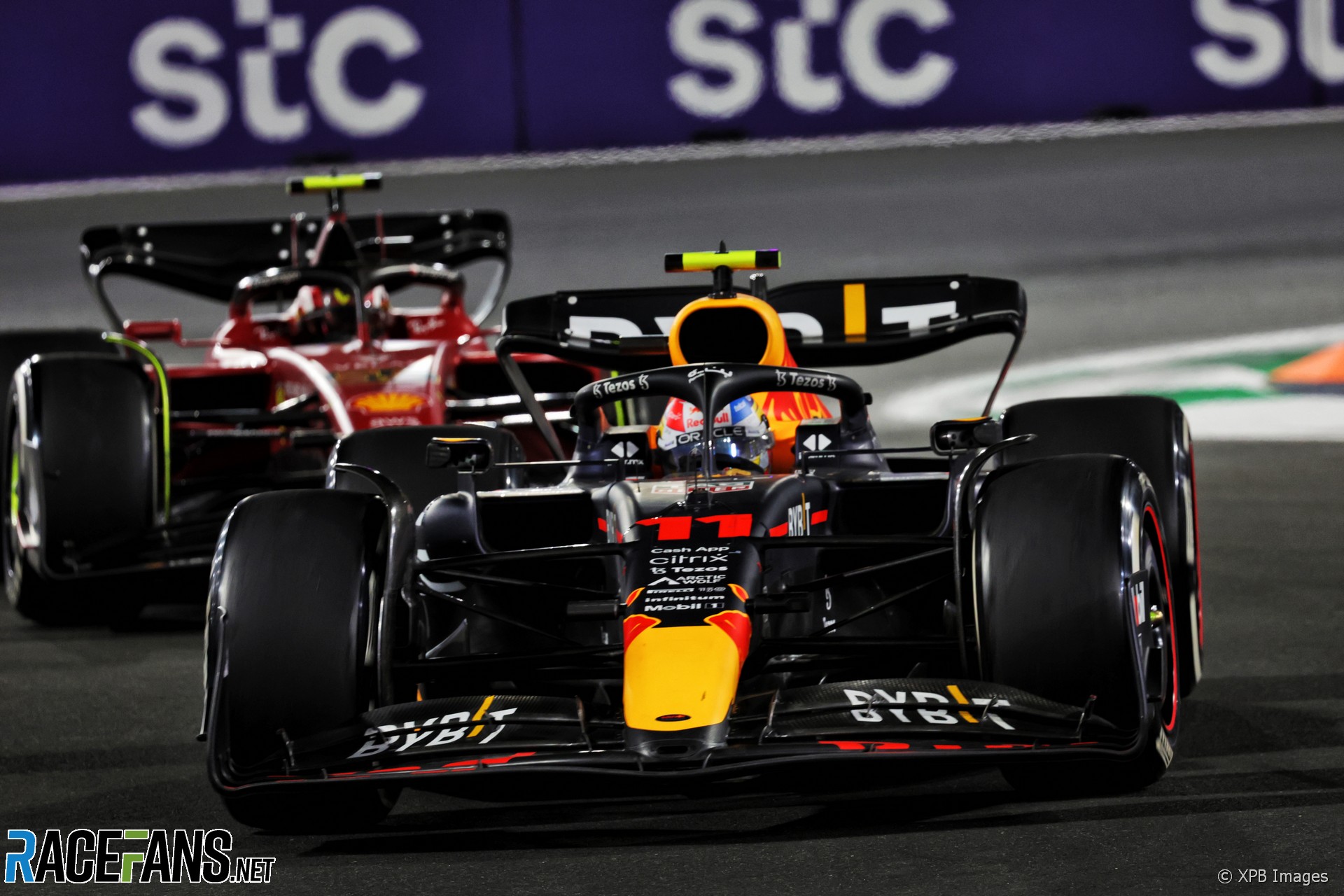 Sergio Perez was leading the Saudi Arabian Grand Prix when he pitted from the lead at the end of lap 15. Almost immediately, the race was neutralised by a Safety Car when Nicholas Latifi crashed at the final corner. Charles Leclerc, Max Verstappen and Carlos Sainz Jnr all pitted on the next lap, with Leclerc and Verstappen rejoining ahead of Perez.

As Sainz exited the pit lane he crossed the white Safety Car line centimetres before Perez, but was pushed wide on the exit of turn two and Perez moved ahead into third place. Sainz immediately protested. “He pushed me off, I was ahead,” he said. “The FIA needs to judge this. I think I was ahead at the Safety Car.”

Red Bull team principal Christian Horner later explained that his team had consulted with the FIA over whether they needed to allow Sainz through. “It was so tight with Sainz,” Horner said. “We checked with race control, we felt that we were potentially slightly behind. We asked them to check and they confirmed that.”

Before the restart, Perez was told “Checo, we need to give up the position to Sainz after the restart,” with Sainz also warned that the Red Bull would return his position. Perez complied once the race was back to green flag racing on lap 21, allowing the Ferrari driver through on the approach to turn four. 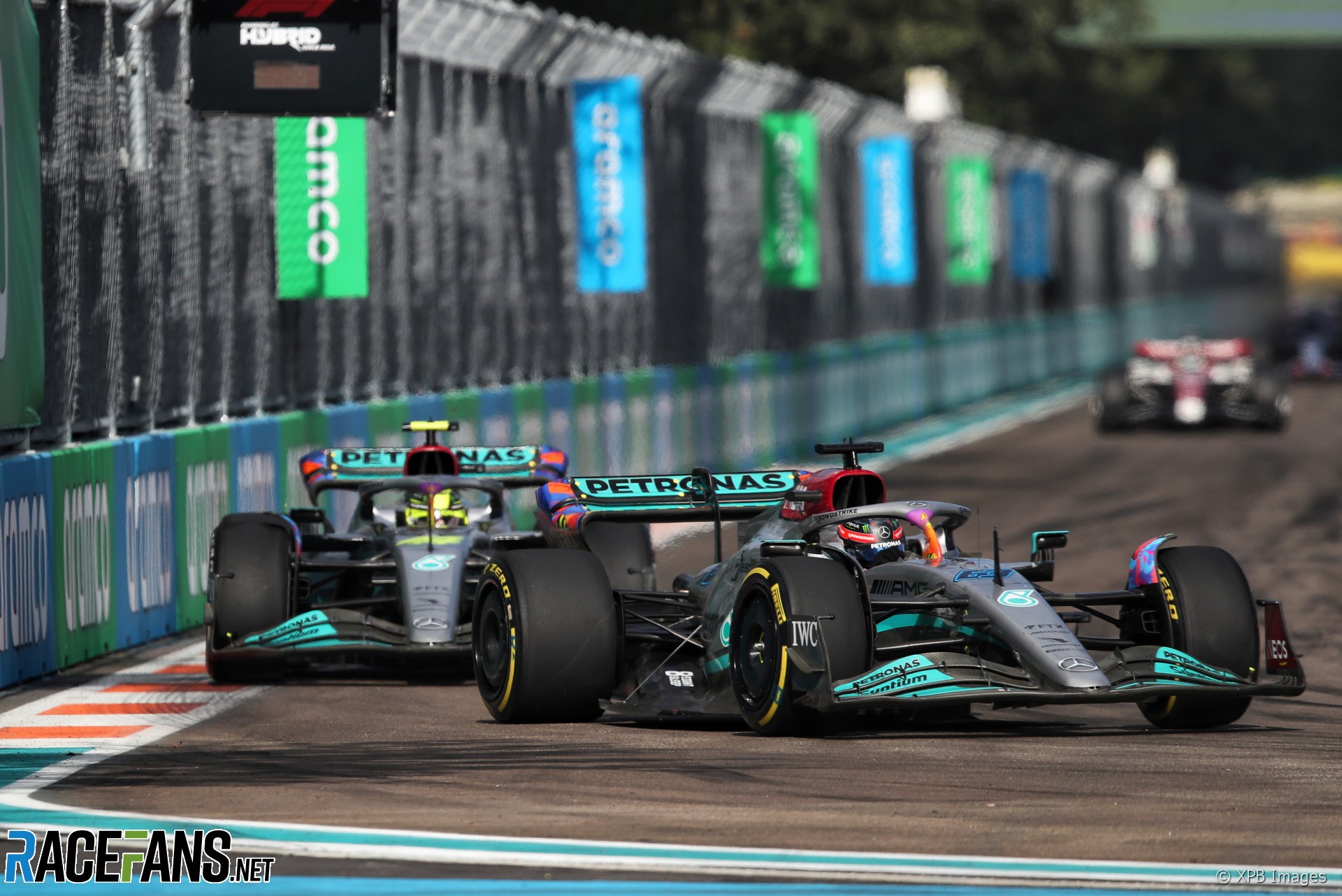 Late in the Miami Grand Prix, the Safety Car was deployed due to a crash involving Lando Norris and Pierre Gasly on lap 41. George Russell took advantage to pit from fifth position for medium tyres, rejoining just behind team mate Lewis Hamilton in seventh.

On lap 50, after the race had restarted, Russell was all over his team mate on fresher, faster tyres. He tried a move around the outside of turn 11, running off the track before diving up the inside of Hamilton into turn 12 and gaining the position through the corner. Three laps later, Russell received an instruction to return the position to his team mate.

“George, we need to give the place back to Lewis because we went off-track when we overtook,” Russell’s engineer Riccardo Musconi informed him. “He pushed me off the track,” Russell protested. However, Musconi insisted that “race control asked the question.”

Russell allowed his team mate through along the pit straight at the start of lap 54 – three-and-a-half laps after the initial pass was made. Mercedes team principal Toto Wolff later confirmed that the FIA had told Mercedes Russell had to give up the position. 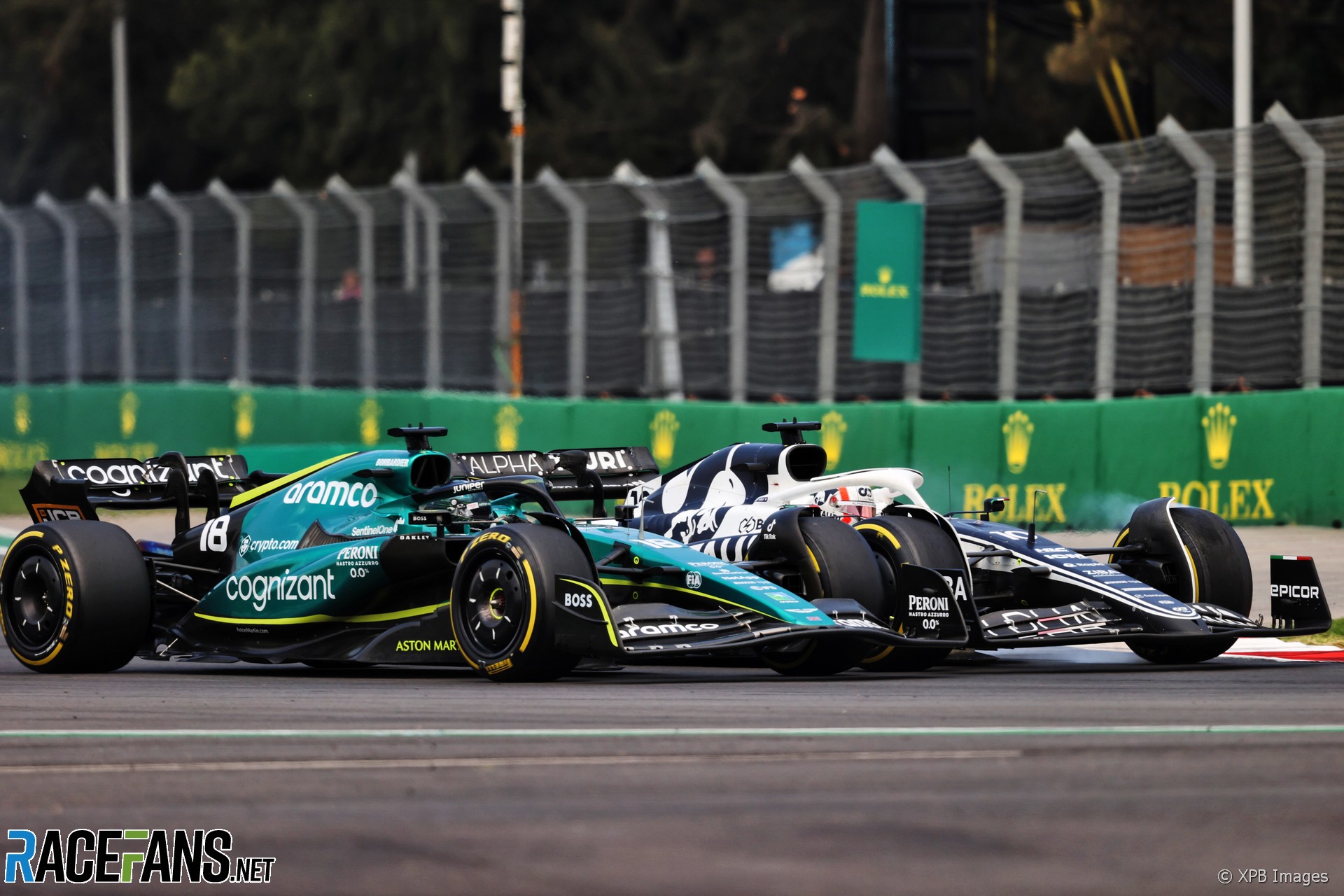 On lap 13 of the Mexican Grand Prix, Pierre Gasly and Lance Stroll were battling over 15th position. Gasly had a run on the Aston Martin driver approaching turn four and attempted to pass up the inside of the left-hander. However, Gasly locked his brakes and ran wide outside of the white lines on the exit of the corner, pushing Stroll wide with him but taking the place.

As the incident had been broadcast live on the world feed of the race, the stewards immediately noted Gasly for ‘forcing another driver off the track’. “[He] forced me wide,” Stroll reported over team radio. “Why isn’t he giving the position back?”

“They’re investigating it,” Stroll’s engineer Ben Michell confirmed. “He should get a penalty.”

Two laps after the incident, a timing screen message from race control announced that the stewards were investigating Gasly for “forcing another car off the track”. Gasly did not receive any notification over the radio that his pass on Stroll was even under question.

Eventually, four laps after the pass had been made, the stewards completed their investigation and handed Gasly a five second time penalty – again announced as being due to Gasly ‘forcing another car off the track’.

“Why didn’t they ask me to let him pass again?,” Gasly questioned his time. “I don’t get it. It’s what they do all the time.”

Asked by RaceFans after the race whether AlphaTauri had been told to return the position to Stroll, Gasly said not. “I don’t think the FIA told them to give the position back, otherwise they would have said it,” he said.

Curiously, despite handing Gasly a penalty for ‘forcing another car off the track’, the official FIA decision document stated the penalty had actually been applied due to Gasly “leaving the track and gaining an advantage”, with no mention of Gasly “forcing” Stroll off the track. 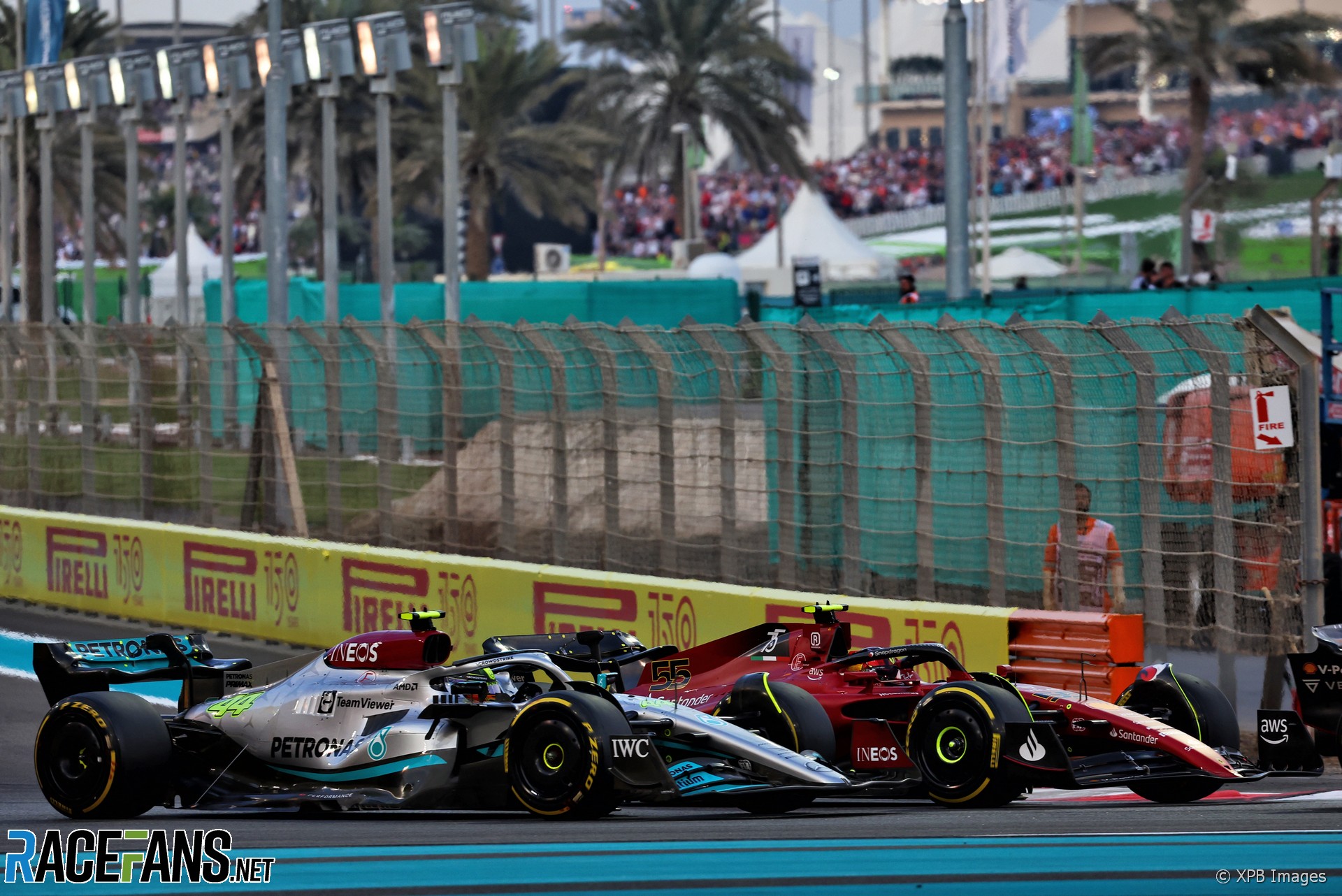 For the second year in succession at Abu Dhabi, Lewis Hamilton missed turn seven on the opening lap after taking avoiding action while defending from a rival attacking him into turn six. This year, it was the Ferrari of Carlos Sainz Jnr who dived to the inside of Hamilton as they approached the 90-degree left-hander.

Sainz kept his car on-track with Hamilton running out of room on the outside. He drove across the sausage kerb on the inside on the approach to turn seven and bounced over it, rejoining the circuit still ahead of Sainz. “Okay, I overtook him,” Sainz said over the radio. “He needs to give me the position back. Super unfair.”

Hamilton disagreed. “Got pushed wide, mate,” he insisted to race engineer Peter Bonnington. Having bounced over a sausage kerb before rejoining the circuit, Hamilton was far more concerned about possible damage to his car than he was about whether he had legally maintained his position.

For three laps following the incident, there was no discussion over Hamilton’s radio over whether they should concede the place to Sainz. However, as he exited turn seven on the fourth lap, Bonnington told Hamilton that Mercedes had been “asked to give the position back to Sainz.” Hamilton complied with the order on the exit of the next corner. There was no further investigation or action taken over the incident.

Are the rules applied consistently?

It’s striking how the FIA’s race control remains a key element in teams’ decision-making process. Rather than actively telling teams what to do, it appears as if the new approach for 2022 was more passive – not giving out direct instructions but clarifying what would likely happen if teams took no action.

In the case of Red Bull in Saudi Arabia and Mercedes in both Miami and Abu Dhabi, it’s clear that on all three occasions, the teams sought out the advice of race control before telling their drivers to return their positions. While, at first glance, that may seem to go against Wittich’s own guidance issued at the start of the season, there’s also nothing to suggest that the FIA reached out to teams first to tell them to give back positions. Instead, race control remained passive. They only told teams what would likely happen if they failed to act – that is, they would be penalised.

If AlphaTauri had consulted race control about whether Gasly had committed a breach it seems likely they would have been advised to allow Stroll back through. Whether or not this is the best approach to these incidents is another debate.

Perhaps adding a mechanism to the regulations – such as obliging drivers to yield positions within two minutes of an incident being noted – would help make penalties more consistent. After all, Leclerc’s penalty for holding onto second in Suzuka on the final lap after missing the final chicane was issued minutes after the chequered flag.

There is also the matter of penalty points. If a driver commits an infraction, they can expect punishment from the stewards in the form of superlicence penalty points. But unlike if a driver shunts into another driver or fails to slow down under a yellow flag, it seems that drivers who return positions have an opportunity to avoid penalty points they would otherwise receive. With Gasly heading to Alpine next season two points shy of a race ban, his new team principal Otmar Szafnauer challenged how fair the current system is.

“I’m sure there are considerations this year to give places back where perhaps the team said ‘don’t’ and you get penalty points and some other things. I think we have to re-look at it and make sure that it’s equitable.”

With another season concluded, drivers and teams will have plenty more to discuss about how the rules of racing are applied in Formula 1. Gasly’s displeasure over his Mexico penalty indicates the question of when drivers should be made to give positions back – and who should be responsible for giving those instructions – is still not clear for all.

11 comments on “Give up a place or take a penalty: Why did F1 handle these incidents differently?”